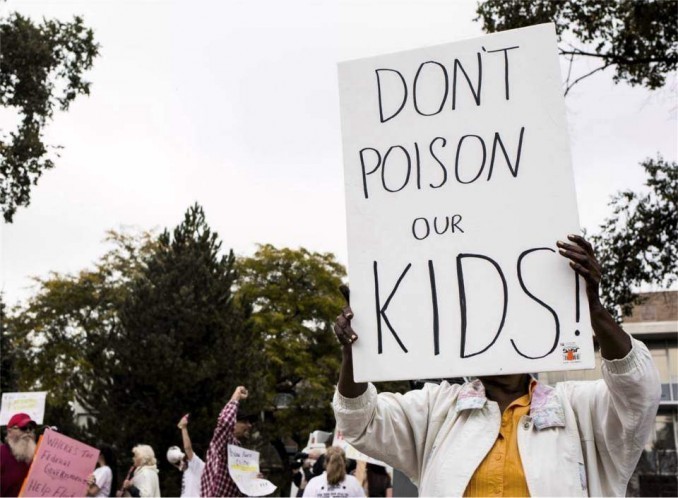 Only a few months ago the Flint water crisis was front-page news around the country. The world learned of the lead-poisoning crisis caused by the state and city officials’ decision in April 2014 to draw water from the highly corrosive Flint River and the same officials’ failure to add anti-corrosive chemicals.

Today, outside of Flint’s surrounding area, headline stories are infrequent. One that did draw attention was the June 28 report by the federal Environmental Protection Agency, stating that filtered Flint water was safe to drink, even for pregnant women and children under six. The recommendation was based on the drop in lead levels in filtered water.

On the surface that seems like wonderful news. But the reality is more complex. Leaving a filter and spare cartridges with instructions on someone’s doorstep — as some agencies have done — is not going to help someone who can’t read or whose primary language is not English.

Now volunteers are going door to door, checking on who needs filters and/or replacement cartridges. They are seeing people with filters that are broken, don’t fit their faucets or are not attached properly. They are also seeing cartridges that have expired or don’t fit the filters people have. Some homes still don’t even have filters.

Michael Hood, who runs Crossing Water, which is coordinating a number of social service agencies and organizing volunteers to ensure that Flint residents have access to safe drinking water, told Michigan Radio on June 30, “Anywhere from 50 to 70 percent of folks that we’re seeing have filters that are not working.”

Not every medical expert agrees that filtered water is now safe for everyone. Genesee County Medical Society, a Flint area doctors’ group, advises high-risk populations to still use bottled water and tells everyone to keep testing their water for lead.

This is because a recent water flushing program — intended to force more water through the system to make anti-corrosive chemicals effective — “may have dislodged more of the particulate matter and we’re concerned it may have gotten caught in aerators and may have increased the amount of lead in the system.”

Dr. George Natzke, of GCMS, urged anyone whose filter is not functioning to keep drinking bottled water. (wnem.com, June 29)

Based on Hood’s and Natzke’s assessments, it is likely that a majority of Flint’s 100,000 people still depend entirely or partially on bottled water. With the Michigan National Guard no longer assisting with distribution, bottled water is harder to come by.

The Centers for Disease Control and Prevention recently announced that blood-lead levels in Flint’s children doubled after the switch to the Flint River and fell after the city went back to Detroit water. Yet the cognitive damage done to the children from lead remains a constant source of grief for parents and for young people who are suddenly struggling and failing in school. Funds to help ameliorate the damage via early intervention and proper nutrition are just now beginning to trickle in.

Water crisis not only about lead

The other problem with the filters is that many other contaminants in Flint’s water besides lead are getting through, including Legionella bacteria. At least 12 people died since 2014 from an outbreak of Legionnaires disease caused by the failure to add anti-corrosive chemicals to Flint River water. However, suspicions are growing that additional pneumonia-related deaths, such as that of 68-year-old Bertie Marble, were actually caused by undiagnosed cases of Legionnaires’.

The cause of the painful skin rashes, hair loss and breathing difficulties after showering, bathing and playing in kids’ swimming pools has yet to be identified. Lead is not the cause, and the problem did not go away after the switch back to Detroit water.

The only real solution, as any Flint resident will tell you, is to replace the 10,000-plus lead service lines and ultimately the whole aging infrastructure. Since the entire system was subjected to the corrosive river water, which is 19 times more corrosive than Detroit water, damage to the pipes has caused a spike in water main breaks.

The cost of water loss and repairs is then passed on to Flint residents, whose bills are already among the highest in the country. The massive infusion of needed funds has not been forthcoming from either Washington or the state. So far, 33 service lines have been replaced. The most recent state budget bill, which includes more money for Flint, will only pay for another 500 line replacements. The Michigan House of Representatives passed the bill just before its summer recess after a massive grass-roots call-in campaign.

Meanwhile, the Natural Resources Defense Council released a report June 28 stating that — based on EPA data — 5,363 U.S. water systems serving 18 million people do not comply with the federal Lead and Copper Rule. Violations include failure to test the water and inadequate treatment. That means over 5,000 Flints are waiting to happen!

The report does not indicate how many of these water systems have been privatized. Veolia, the world’s largest private water company and a notorious union buster, is being sued by the state of Michigan for its role as a paid consultant in 2015. Veolia’s report on Flint water quality falsely stated that the water was safe to drink and was in compliance with federal regulations.

This is what happens — and will continue to happen — under the capitalist profit system. Billions of people worldwide lack access to clean, affordable water while billionaires keep getting richer. Only socialism can prevent more Flint disasters from taking place.