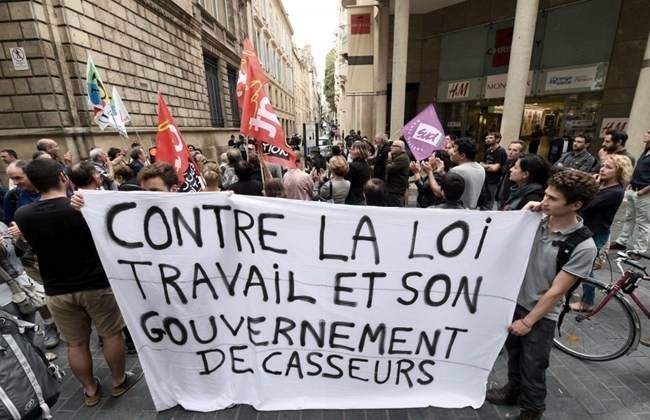 Even if the French government forces the new labor law through the National Assembly without a vote, the unions in the coalition opposed to the new law intend to stay in the streets. According to public opinion polls, 70 percent of the people living in France oppose this law. Even if Parliament passed this reactionary law, the unions argue it should not be enforced.

The CGT labor confederation points out in a communique issued June 28 that even the U.N. International Organization of Labor has declared that this law violates international conventions.

The 11th major national demonstration on June 28 drew 200,000 protesters and strikers throughout France. Some FO (Workers’ Force) contingents in the march called for a general strike, according to video clips.

In the Dordogne Department (county), according to France Bleu radio station, the CGT Energy 24 Union cut the electricity to the homes of Socialist Party parliamentarians June 27-28 to protest their support for the new labor law. Dordogne, though rural, has historically been a center of radical activism.

In the Paris area, unions stopped collecting tolls on some roads and blocked access to some shopping centers and auto routes before the march.

As one marcher told the French newspaper Le Monde on June 28, “There is an illusion of calm, but the anger is immense.”

The coalition organizing the protests has called for another national march on July 5, the date when the National Assembly begins its final deliberations of the bill.

The only French union which supports the new labor law is the CFDT (Democratic French Confederation of Labor), which is politically close to the current so-called Socialist government.

The French regime is trying to show the bosses at home and in other countries that it can force austerity on the working class in France. But the labor movement won’t give up, and has stayed in the streets for four months. Some 98 percent of French workers are employed under collectively bargained, legally enforceable agreements, and they are fighting to keep these guarantees.

When Prime Minister Manuel Valls spoke recently at Montpellier, a city of about a quarter-million people in southern France, at the opening of a light rail line, he was booed and hissed by the crowd over the new labor law. It is interesting that the print media wrote about “dozens of protesters” while the video clip on FranceTV.info shows hundreds of people booing him.

Even if the new labor law is passed, the struggle won’t be over.