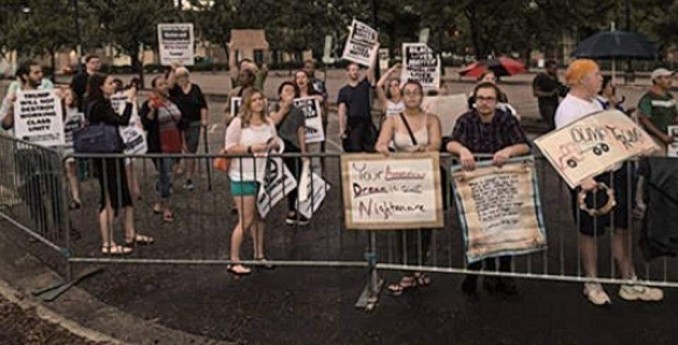 On July 5, protests confronted both capitalist presidential candidates, who were holding campaign rallies in North Carolina.

In Charlotte, N.C., Hillary Clinton spoke alongside President Barack Obama at the first joint rally the two have held. They both spoke on the necessity of stopping Donald Trump and lauded their own supposedly progressive positions on immigration and other issues. After their formal talks, they came to greet people who had filled the overflow space at the Charlotte Convention Center to capacity.

A group of teachers and students with the #Not1More coalition held up a banner that read, “Release them now, stop deporting our students, #FreeWildin” and chanted, “Stop deportations!” Their action stopped Clinton’s remarks to the overflow audience.

The #Not1More group demands a moratorium on deportations, the immediate release of the 12 students who are currently being held in detention centers by Immigration and Customs Enforcement, and for Hillary Clinton to stay true to her promise of ending the raids that seize students for deportation.

Currently, ICE is holding nine students from North Carolina and three from Georgia in detention. In total, these students have been in ICE facilities for the past six months. Wildin Acosta — one of the students from Durham, N.C. — was sentenced to 45 days of solitary confinement for helping an inmate translate a letter into English.

Recent graduate Diana Vieyra, who was protesting, told Workers World she participated because, “I felt it was important for me, as an undocumented student, who had the privilege of graduating high school, that the 12 other students held in detention centers by ICE be given the same opportunity.” She urged Clinton to follow through on her promise, saying, “Hillary has come out against the immigration raids, as well as met with Dreamers, but it’s now time for her to actually meet our demands.”

Chants of “No Trump! No KKK! No racist, fascist USA!” and “Hey hey! Ho ho! Deportations have got to go!” rang out and confronted the crowd as they filed out of the auditorium at the end of the rally. A brief standoff ensued as Trump supporters shouted racist slogans and chants at the demonstrators, who refused to give up any ground.

Many from North Carolina are planning to mobilize to join protests in Cleveland at the Republican National Convention and in Philadelphia at the Democratic National Convention, later this month. Both Trump and Clinton have also made it clear that they will be returning often to the state until the elections in November — and organizers have announced their intentions to organize protests to disrupt, confront and shut down these rallies of the capitalist candidates every time and anywhere they are held in the state.