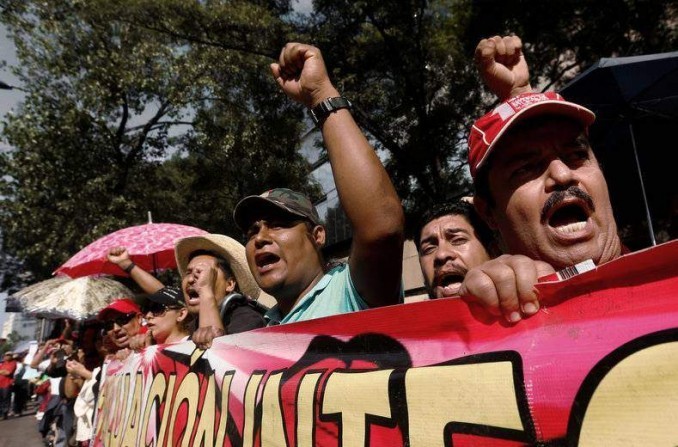 Now is the time for working people in the United States to act in solidarity with the valiant teachers’ struggle in Mexico. The teachers’ union, the National Coordinator of Education Workers (CNTE), announced an indefinite teachers’ strike beginning July 5.

That Mexico’s teachers need solidarity from laboring people everywhere was brutally proved in Nochixtlán, Oaxaca, on June 19 when federal police fired on teachers, students and Indigenous people who had taken the teachers’ side. Thirteen died and over a hundred were wounded.

This is not the first murderous attack by the Mexican state on teachers. In 2014, 43 student teachers were kidnapped from activist Ayotzinapa Rural Teachers’ College and have remained “disappeared.” The Oaxacan section of the CNTE has been militantly resisting state repression and attempts to break their union.

Workers in the U.S. should pay close attention to how the state is attacking the teachers’ union. Before the federal government brought out their guns, the state first imposed new certification testing for who could teach. These requirements were culturally biased and designed to eliminate teachers from rural, impoverished and Indigenous backgrounds. Those teachers are the most militant fighters for economic and social justice for workers and oppressed peoples.

The capitalist bosses need school systems to produce workers to be unthinking and apathetic cogs in profit-making machines. Big business doesn’t want workers asking critical questions about how they can take charge and tear down the system exploiting them. Let alone replace capitalism with a system they run in their own interests.

In the U.S. there are ongoing, insidious neoliberal attempts to privatize public education, “standardize” the curriculum to fit the plans of big business and strip teacher unions of the power to fight for their students. Right-wing legislators are attacking university programs that teach histories of fightback, especially liberation lessons from people of color and women.

Militant U.S. teacher organizations see the connections between their struggles and those of Mexican teachers. Immediately, the Chicago Teachers Union, the California Teachers Federation and MORE, the movement of rank-and-file educators in the Social Justice Caucus of the United Federation of Teachers in New York City, sent messages of solidarity to the CNTE. Some U.S. teacher unions held demonstrations and “die-ins” to educate the public about the struggle in Mexico. Class-conscious teachers are warriors in the battle of ideas between the working class and the ruling class.

Just as U.S. unionists have begun to show support for the valiant general strike of French workers against their capitalist government, now is the time for all-out working-class solidarity.