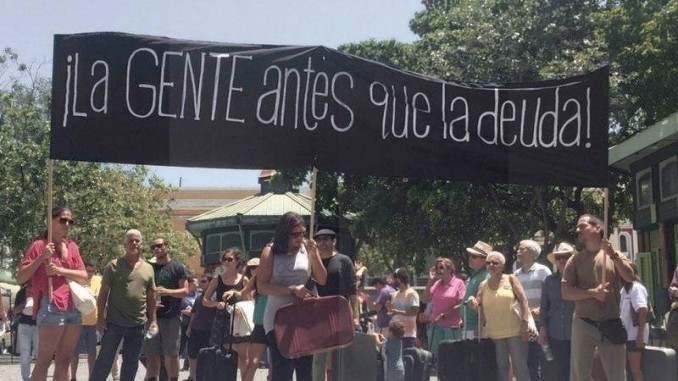 On June 30 when President Barack Obama signed the Puerto Rico Oversight, Management and Economic Stability Act — PROMESA (meaning promise in Spanish) — it triggered a new phase of struggle in the island/archipelago.

The law, passed by the U.S. Senate a day earlier and described by most corporate media as a “help” to Puerto Rico, has, on the contrary, the intention to establish a collection agency through a Financial Control Board for the benefit of bondholders at the expense of the Puerto Rican people.

The rush for approval was due to the July 1 expiration date for the payment of nearly $2 billion in interest and principal of the more than $70 billion in public debt that the island has accumulated over the years. On the island, Gov. Alejandro García Padilla had already submitted to the Puerto Rican Legislature a bill declaring a moratorium on debt repayment. He announced that the government did not have sufficient funds available to make payments on the debt and provide basic services and essentials for the people at the same time.

In fact, on July 1, the much-discussed default arrived, adding to the more than $400 million that was unpaid in May.

Hours earlier on the same day, as a prelude to the announcement of default, the auditing firm KPMG released its voluminous report — as demanded many times by creditors and the U.S. Congress — on the Puerto Rican government’s financial status for 2014. According to KPMG, the government by then had already accumulated a deficit of $50 billion. KPMG questioned the government’s ability to continue operating. (elnuevodia.com, July 1)

Whoever reads García Padilla’s statements on the default, and the necessity to put the needs of the people first, might think that he is governing on behalf of the people. Nothing could be further from the truth. Both García Padilla and earlier governments, whether the “populares” of the PPD (the ruling Democratic Popular Party) or the “estadistas” of the PNP, (pro-statehood New Progressive Party), have by and large taken personal advantage of their positions of authority, enriching themselves and filling their administrations with corruption while ruling in the interests of U.S. imperialism.

As a result, what is happening in Puerto Rico is that the majority of the people have become enormously dissatisfied with their government and with their undefined colonial status.

Bad things happen — all together

To better understand this new phase of the struggle in Puerto Rico, we need to see the context in which it occurs.

The fiscal crisis has had serious consequences in many areas of the country. The measures the government has implemented — with the advice of U.S. companies, including those contained in Plan Krueger 2015 — have driven the people into poverty and despair.

To list just a few of the situations that impact the people and diminish their quality of life:

On the last point it is important to report a dangerous development regarding police recruitment that occurred a few days ago.

The fact that there is an impoverished but well-trained workforce in Puerto Rico, which is bilingual and has U.S. citizenship, attracts U.S. agencies that offer better salaries than on the island. Workers not only earn less in Puerto Rico, but those fortunate enough to have jobs are at risk of losing them.

U.S. agencies have already been to Puerto Rico from the United States to recruit nurses, teachers, doctors and other professionals. Even more troubling is the recruitment of police. With the excuse that there are more Latinos/as in U.S. cities now, they recruit Boricuas to be used against Black and Latino/a people. This is what none other than the police force of Baltimore has done — the city where the murderers of Freddie Gray go unpunished! Some 1,600 Puerto Ricans have registered to take the police exam!

Although there is still no unity of action, different sectors in Puerto Rico are mobilizing.

With consistent and militant actions, teachers have managed to stop one measure in the Puerto Rican legislature, the “Bhatia Plan.” This plan aimed to implement the privatization of many schools, the dismissal of thousands of teachers and the destruction of public education, among other regressive provisions.

The United Front Against Aerial Fumigation, composed of several environmental, health, agriculture, social justice and other organizations, has called for various actions, including demonstrations against aerial spraying of the deadly toxin Naled, which the Centers for Disease Control and Prevention proposed be used to “eradicate” the mosquito that carries the Zika virus.

In Puerto Rico there is enormous opposition to its use not only because it’s harmful to people, but also for its damage to bees, which in turn would harm agriculture. Puerto Rican experts have proposed other, more appropriate ways to counter Zika, but the government has not listened to them. Thanks to protests, however, the fumigation that would have begun on July 1 was stopped. The United Front continues with demonstrations the week of July 4 when public hearings are being held on the use of Naled.

On June 30, the militant and class-conscious union UTIER, representing the workers of the Electric Energy Authority (AEE), held a successful, islandwide 24-hour strike to protest and fight against the attempt to privatize and restructure the AEE. That is being reorganized under the guidelines of Lisa Donahue of Alix Partner for the benefit of bondholders. Among Donahue’s proposals are to reduce medical plan benefits and retirees’ pensions. During the strike, the workers marched from the AEE main office and packed the streets on the way to the Capitol and the governor’s residence in San Juan.

Ángel Figueroa Jaramillo, president of UTIER, highlighted the importance of the union when he declared, “We in the UTIER have struggled to build fundamental rights for the whole working class of our country. It is with this principle that we defend with all our power our medical plan and retirement system, which should be guaranteed for all citizens. But unfortunately that is not our reality as a people, which must not stop us from fighting to achieve it.” (utier.org, July 1)

As soon as the U.S. Senate announced its approval of PROMESA, a large group of youth assembled early on June 30 in front of the gates of the Federal Court in San Juan. There, they set up a “Camp Against the Junta” and said they will not leave until their demands are heard. Their call is for people to unite against the Financial Control Board (Junta), against colonialism, against spraying Naled and in defense of the beaches, public education and the people. Through their Facebook page (@Campamento Contra La Junta), they publicize their demands and receive messages of solidarity from organizations and individuals on the island as well as from the United States.

On July 1, federal agents threatened to evict the camp, but gave no deadline. Since then, however, the camp has been growing as more people show up.

Organizers called for a day of action on July 4 with the following message: “We call this demonstration as an action to show opposition to the colonial status of all Puerto Ricans and, through educational media and artistic means, to denounce the imposition of a Financial Control Board. This event is symbolic because as the United States celebrates its independence, it is simultaneously establishing projects to enslave and imprison its colonies. Now is the time for the Puerto Rican people to speak out together as one: #NoALaJuntaDeControlFiscal, #NoALaDeuda, #SíALaDescolonización