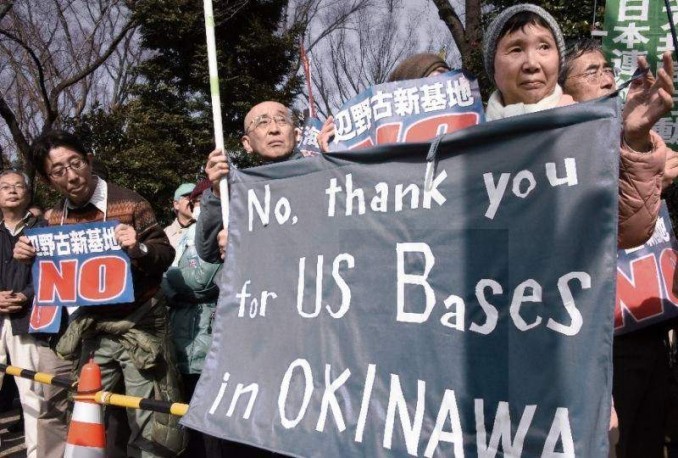 Resistance is alive and well in Okinawa. Some 65,000 people rallied on June 19 in Naha, the island’s capital city, to protest the U.S. military presence on their island. Signs called for the withdrawal of Marines in the largest protest in 21 years against U.S. bases.

This demonstration was sparked by the rape and murder of an Okinawan woman by a former U.S. Marine working at Kadena Air Base, a horrific but not uncommon occurrence. The Asia-Pacific Journal of July 1 said 120 rapes by U.S. military personnel had been reported in Okinawa since 1972. Notably, in 1995, 85,000 people protested the kidnapping and rape of a 12-year-old girl by three U.S. soldiers on the island and demanded closure of the Futenma Marine Corps Air Station.

Instead, the U.S. and Japan agreed to move the Futenma base from Ginowan, a populous city, to a more remote site. But in 2010, 100,000 island residents strongly protested construction of a new base. Some 76 percent of the island’s residents dispute the relocation of Futenma base to the seaside village of Henoko, where the people are also vehemently against it.

In February, tens of thousands of people circled the Parliament in Tokyo, while simultaneous protests were held in several other cities, all against the construction of a base in Henoko.

The June 19 demonstration demanded that the base be moved off Okinawa altogether. This was echoed by Takeshi Onaga, Okinawa’s governor, who had rescinded permission for Futenma’s relocation. But the June 28 Japan Times reported that Onaga will not sue the central government over this issue. Moving the base has now been postponed until 2025 due to mass opposition.

Serious crimes by U.S. troops and employees have ignited massive protests against U.S. bases on the island, putting a spotlight on the ever-present anger at and opposition to the U.S. military presence by the majority of Okinawans. This struggle is always ready to erupt. Five years after the 1995 mass actions, a historic 11-mile human chain encircled Kadena Air Base when then-President Bill Clinton visited Okinawa in July 2000.

Two months of protests took place in 2010 demanding Futenma’s closure. On April 25 of that year, 100,000 Okinawans demanded all U.S. bases off the island. Two years later, on Sept. 9, once again 100,000 island residents rallied — this time against the U.S. installation of Osprey helicopters at Futenma, but they also sought the base’s permanent closure.

“For many Okinawans, every crime is an affront that symbolizes resentment over the disproportionately large U.S. military presence in Okinawa,” admitted Stars and Stripes, a newspaper serving the U.S. military, on May 24. Residents call their country “a virtual military colony.”

Okinawa makes up 1 percent of the landmass of Japan, yet it houses 74 percent of U.S. military facilities in that country. More than half the 47,000 U.S. troops stationed in Japan are on the island. Washington gets worried when the movement against U.S. bases becomes activated, especially as the U.S. is accelerating its military presence in the region and seeks full collaboration with Tokyo.

U.S. imperialism has increased its naval presence in the Western Pacific in its drive for regional domination. Washington has established closer ties with the Japanese government, led by Prime Minister Shinzo Abe, and asserts that its military presence on Okinawa is necessary to protect U.S. interests. Pentagon forces can be deployed from Okinawa to anywhere in the Pacific in under six hours. So Washington is intransigent about maintaining its bases there.

At the same time, Abe, who represents the right-wing, militaristic arm of Japan’s capitalist establishment, has proposed legislation overturning the Japanese Constitution’s post-WWII peace clause. He is seeking to eliminate obstacles to further militarizing the country.

Washington promotes these moves, the May 27 New York Times explained, “to deepen American diplomatic and military investment in the region, but needs the help of allies.” The countries’ joint strategy is aimed at subverting and confronting China and the Democratic People’s Republic of Korea.

On June 18, two U.S. aircraft carriers, 140 aircraft, six smaller warships and 12,000 sailors conducted war games in the Western Pacific, in a threat to China.  They were ostensibly conducted because of China’s maritime claims in the South China Sea, which is 7,000 miles from the U.S. mainland. Pentagon pressure on China has increased with that country’s economic development, which has raised hundreds of millions of Chinese people out of poverty.

Abe’s militarism does not go unchallenged elsewhere in Japan. A growing anti-war movement there, including a new generation of youth, has mobilized strong demonstrations against his policies.

But the biggest protests continue to be on Okinawa. Some 2,000 people demonstrated at Camp Foster on May 22, where Suzuyo Takzato, of Okinawa Women Act against Military Violence, said, “We seek the withdrawal of all bases and forces to ensure that people in Okinawa can live in peace.” (Japan Times, May 22)

Thousands rallied outside Kadena Air Base on May 25, two days before President Barack Obama was scheduled to visit Hiroshima.  Protesters again called for the removal of all U.S. bases on Okinawa and decried a new base in Henoko. Because of mass pressure, Abe had to tell the U.S. to “take measures to prevent something like this from happening again.” He warned of rising anti-U.S. sentiment due to U.S. soldiers’ crimes, but omitted mention of the massive opposition to the Pentagon’s presence in Okinawa, careful to avoid jolting the U.S.-Japan alliance.

Okinawa was the site of a horrific three-month battle during World War II, in which 100,000 islanders, 80,000 imperial Japanese soldiers and 12,000 U.S. troops died. When Okinawans commemorated that battle this June 23, they condemned construction of a new U.S. base on their land. They also called for drastic changes to the U.S.-Japan Status of Forces Agreement, which gives the U.S. jurisdiction over cases involving crimes committed by its military personnel.

Japan agreed to the U.S. occupation of Okinawa after World War II. In the mid-1950s, Washington saw the island as a strategic military outpost and starting building bases there, aimed at People’s China and the Soviet Union. The U.S. dispossessed thousands of Okinawan landowners to build 39 bases on 20 percent of the island’s land, but not without massive opposition.

In 1972, the U.S. loosened its grip somewhat and turned the island over to Japanese government administration. However, to date, no land has been returned to its original owners and the U.S. military still has control over one-fifth of Okinawa, despite popular opposition.

Okinawa is the largest island in the Ryukyu chain, 400 miles southwest of Japan, with the Pacific Ocean to the east and the East China Sea to the west. Japan’s Meiji government forcibly annexed the islands in 1879, quashing a strong people’s resistance.

The Uchinanchu, as the Okinawans call themselves, have never ceded their sovereignty to Japan. Many of the island’s residents assert their right to self-determination as they demand the removal of all U.S. bases.