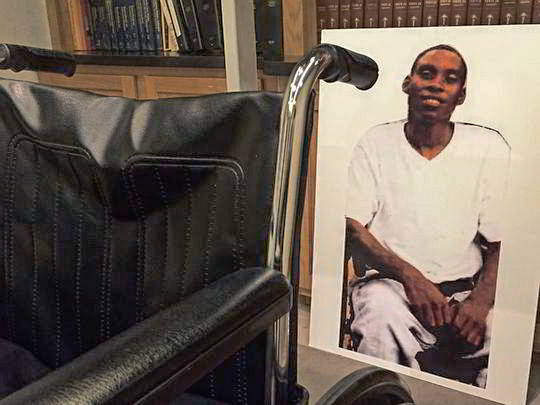 Black community leaders and residents were outraged by this result of an eight-month investigation by the Delaware Department of Justice. The department report cited Senior Cpl. Joseph Dellose for “extraordinarily poor police work” during the incident. Prosecutors initially considered filing a felony assault charge against Dellose. (delawareonline.com)

The report found Dellose fired at McDole with a shotgun about two seconds after ordering him to put his hands up and said Dellose “should not be employed by the city police in any role where he would carry a firearm in public.”  It noted that the city’s “use of force policy” needed updating, and that officers get little training for response to similar situations among people who are psychologically, mentally, emotionally or physically disabled.

The report released a 911 transcript in which a resident reported a man in a wheelchair had shot himself. When the dispatcher says, “They’re going to take him out,” the caller is heard responding, “Don’t kill him!” In a later interview with investigators, the caller said she never saw a gun.  No gun was ever found!

Fighting back for Black and disabled people

The Rev. Donald Morton, executive director of the Complexities of Color Coalition, said: “Now that … we have come to this conclusion, I don’t know that I can tell our communities to remain calm. There is only so much a community of people can take.”

Mahkeib Booker, who launched the Delaware chapter of Black Lives Matter, said the lack of charges tells the African-American community that their lives don’t matter.

McDole’s family commented: “Our family disagrees with the conclusions of the report … which seems to reflect the historic fact that, we believe, no police officer in Delaware has ever been charged with a crime for the fatal use of force on a civilian. Blacks suffer three times the death rate of whites at the hands of police nationwide. But this is not reflected in the report.

“Jeremy was paralyzed and he could not run or hide. … The tactical response reflected deliberate indifference to the life of Jeremy.” In their statement the family said they will continue to pursue a federal wrongful death suit.

On Dec. 3, 2015, to mark the International Day for Persons with Disabilities, the People’s Power Assemblies (PPA) organized a protest in New York’s Penn Station to say “Disabled Black lives matter!” and to highlight the terminal’s infamous lack of access for disabled commuters, especially wheelchair users. Dedicated to the memory of McDole, the protest rocked Penn Station with chants of “Jeremy McDole! Say his name!” and “Disabled people need decent jobs, quality health care, not police terror!”

The PPA is an organization in support of the Black Lives Matter movement to combat the rising epidemic of police murders, particularly of youth of color.

On July 10, the PPA will again protest police murders of disabled people of color at the second annual New York City Disability Pride Parade, marking the anniversary of the Americans with Disabilities Act. The parade, gathering in Union Square Park at 11 a.m., will march and roll up Broadway to Madison Square Park for a disability rights festival from noon until 4 p.m.

The Disability Pride Parade was inspired by the civil rights movements of people with disabilities, people of color and women — as well as the lesbian, gay, bisexual, trans and queer people who just held the largest LGBTQ parade in New York City’s history, which this reporter was proud to march in.