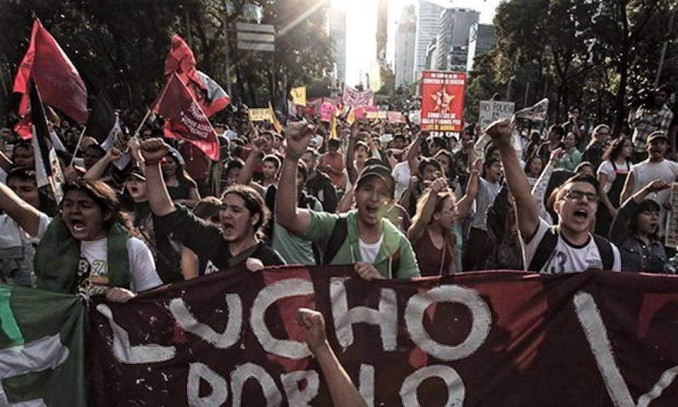 A full-scale workers’ uprising in the Mexican state of Oaxaca has shut down transportation and businesses throughout the region. Access to an important oil refinery has been blocked. As of June 23, there were 21 highway blockades there.

Oaxaca is an impoverished and mostly Indigenous state in Mexico’s rural south. In one small town, reports said, the air was heavy with the smell of burning tires on a strategic highway that leads from the neighboring state of Puebla to the state capital, Oaxaca de Juárez. The highway was blocked with burned-out cars, buses and trailers. Dozens of trailers waited in line to pass.

The uprising came after some 800 Mexican federal police had shot into a crowd of demonstrators who were armed with only stones, sticks and Molotov cocktails. The crowd was defending a barricade in the town of Nochixtlán. At least eight demonstrators were killed and some 100 wounded. Another 22 are missing, and some 27 were arrested and report being tortured. At least five more died from their wounds.

“They are shooting at us as if we were animals,” William Velázquez, a 34-year-old teacher, told a reporter. He picked up a large stick. “These are the only weapons we have. We don’t carry guns. They were firing on unarmed civilians.” (latino.foxnews.com)

At first, the Mexican government claimed that the cops did not carry weapons. But after many news organizations showed video of police firing bullets, the government tried to say that “unknown gunmen” began firing at both sides, even though none of the cops had been shot. Finally, Federal Police Chief Enrique Galindo acknowledged that he had sent in officers with guns. “The police obligation is to protect the population,” he said, as if that excused the carnage from police bullets.

The day after the shootings, Ramos Zárate, a journalist covering the Oaxaca events for the newspaper El Sur, was mysteriously shot and killed. He is one of eight journalists killed in Mexico so far this year.

Solidarity with teachers’ fight
to save union

This all stems from a confrontation between the Mexican central government, led by President Enrique Peña Nieto, and the National Coordinator of Education Workers (CNTE), the Oaxaca section of the largest teachers’ union. The government demanded that the teachers pass a national certification test or be discharged. Dozens of teachers were then quickly fired. Several CNTE leaders were arrested on trumped-up corruption charges, which the teachers describe as a move designed to break their union.

The CNTE is calling for the removal of the test requirements, which they point out fail to take into account the special conditions of the impoverished people of Oaxaca, where some 21 Indigenous dialects are spoken. The union is also demanding the immediate release of its leaders.

Since the police shootings in Nochix­tlán, protesters have burned police headquarters in San Pablo Huitzo and Santiaguito. They have blockaded roads, a shopping mall, even train tracks in the western state of Michoacán. They have forced bus lines to cancel trips to Oaxaca, a popular tourist spot. And in Oaxaca city itself, the teachers have set up an encampment in the city’s main square, where thousands of teachers from around the country have arrived to defend it.

Militant acts of solidarity with the Oaxaca teachers have erupted throughout Mexico and, indeed, around the globe. In Chiapas, Mexico, teachers and residents set up numerous blockades, including one that cut off the Pan-American Highway. On June 21, for example, a mass solidarity assembly of faculty, staff and students was held at the National Autonomous University of Mexico in Mexico City.

Six thousand people marched in solidarity in Monterrey, Chihuahua and other cities in northern Mexico. In the U.S., the Chicago Teachers Union, which has expressed its solidarity with the CNTE for many years, staged a “die-in” at the Mexican Consulate in Chicago.

On June 20, at the Mexican National Indigenous Congress, the Zapatistas issued a statement calling on “our peoples and civil society in general to stand with the teachers who resist at this moment, to see us in them. … We invite all the peoples from the fields and the cities to be aware and in solidarity with the teachers’ struggle, to organize ourselves autonomously to be informed and alert in the face of the storm falling on us all.”