When the news broke that 12 people had been killed by Mexican police during protests over attacks on education, several U.S. groups called for solidarity demonstrations with the teachers and students in Mexico. Below are short reports from two of them. 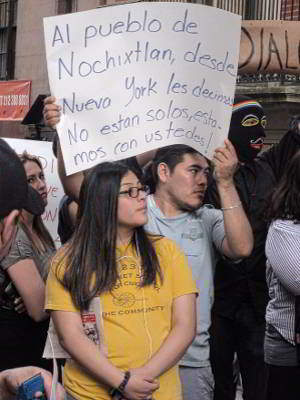 A vigil and protest against the police killings in Mexico were held on June 24 at the Mexican Consulate in Denver in response to a call from Alliance for Global Justice. The demonstrators carried signs outside the consulate and then walked through it with the signs.

The teachers are fighting to keep their union and stop government “reforms” in education that would get rid of 3,000 teachers and schools that train many poor youth and include expression of Indigenous cultures.

The U.S. bears special responsibility for the deaths, since a large amount of U.S. money was given the Mexican government under the Merida Agreement, supposedly to fight crime and drugs, which has been used instead to arm the police. These arms are now being turned against social protesters such as the teachers. The U.S. also has built a private for-profit prison in Sonora where the union leaders of the CNTE, a democratic movement within the National Union of Education Workers, have been sent. The U.S. plans to build 16 more such prisons, according to the AFGJ.

“We demand an end to the violent oppression in Oaxaca, Mexico, against teachers, students, parents and unionists against the neoliberal education reform laws. These laws would lead to massive firing and the closure of teacher training schools. They would replace culturally relevant and sensitive, community-based education with standardized testing and a deemphasis on critical thinking. Classes that support Indigenous identity would be replaced with a streamlined, one-size-fits-all school system, during a time that social and educational investment by the state is being replaced with increased spending on the military, law enforcement and prison construction. These new policies, and the instruments for repressing the strike, are being directly supported by the U.S. government.”

People in Houston are in firm solidarity with the teachers’ union in the southern Mexican state of Oaxaca, which has been on strike since mid-May and has now been the victim of violence from the local police as well as the military. A June 22 demonstration at the Mexican Consulate here, called by the Asamblea Popular de Houston, drew many activists including the Brown Berets, the Houston Socialist Movement, supporters of the Zapatistas, indigenous activists and Workers World Party. Several teachers spoke about how teachers work with love for their students, often at meager pay, and must be supported. On June 25 activists gathered at the Mecom Fountain, in the center of several main Houston streets. The union group leading the strike is the National Coordinator of Education Workers. It is estimated that 12 people have been killed, countless have disappeared, and many are wounded and in the hospital. Activists have begun a hunger strike at the Mexican Consulate that will last three days.