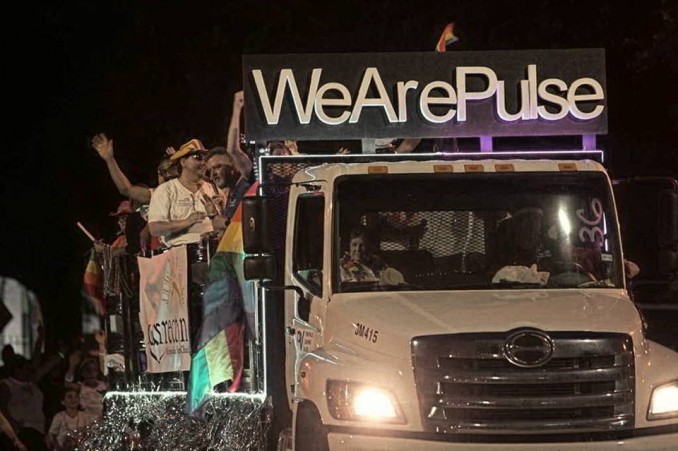 Houston’s Pride festival and Pride parade drew about three-quarters of a million people to downtown on June 25, all determined they would not let fears rising out of the Orlando LGBTQ massacre deter them.

The march was led by people carrying a huge rainbow flag overwritten with the names of those killed in Orlando. Honorary grand marshal of the parade was Imran Yousuf, a bouncer at the Pulse nightclub who helped save many lives during the Orlando killings. He said, “It’s a good feeling — to get out there, help rebuild and remember the ones we lost in the best way we can.”

The female grand marshal was African-American activist and attorney Fran Watson, who overcame great odds to get her GED diploma, graduate from the University of Houston-Downtown and then from Texas Southern University’s Thurgood Marshall School of Law in 2009. In 2012, Watson joined the Houston Stonewall Lawyers Association.

Although Watson grew up in Houston long after the Civil Rights Movement, she is aware of her past and her family history. “My great-great grandmother was a slave,” she says. “My grandmother used to tell me stories that her mother had passed down to her about those days. It had a deep impact on me.” As an African-American lesbian, she says she understands the intersectionality of being a woman, a person of color and a member of the LGBTQ community. She is the first African American to be elected to Houston’s GLBT Political Caucus.

Houston City Hall was lit in the colors of the rainbow flag during June, and Mayor Sylvester Turner not only supported Pride 2016 but encouraged everyone in Houston to come out and celebrate. The day before the Pride festival, the African-American mayor held a press conference to announce that Houston was forming an LGBTQ Task Force so the needs and issues of LGBTQ communities would have a voice at City Hall. Turner said, “As I stated at the Houston Stands with Orlando Vigil, as long as I am mayor, we are going to stand together.”

In this, the most diverse city in the United States, there were more nationalities and ethnicities present at Pride 2016 than could be counted.

Despite Orlando, despite this being the 25th anniversary of the July 4 gay-bashing murder of Paul Broussard outside a Houston gay nightclub, despite the oppressive heat — Houston proved that solidarity and LGBTQ Pride ruled theday.