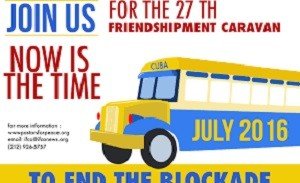 Have the changes in U.S.-Cuba relations made activities like the Pastors for Peace Friendshipment Caravans unnecessary?

The Interreligious Foundation for Community Organization says the changes make the annual caravan and travel to Cuba as needed as ever. Although it appears that much has changed in U.S.-Cuba relations, the underlying laws and regulations that restrict trade and travel for U.S. residents and businesses still exist. Extraterritorial restrictions on international commerce with Cuba are also still very much in effect.

At a June 24 meeting in New York City, IFCO launched a massive national outreach campaign urging Congress to support legislation that would end the ban on travel and trade with Cuba. The campaign will target congressional members as they head home to their district offices for the July break.

In a small but unprecedented move, a Senate committee has approved amendments to the federal spending bill that would lift the travel ban that still prevents U.S. tourists from legal travel to Cuba.

“Now is the time to end this blockade once and for all!” exclaimed IFCO Executive Director Gail Walker, an organizer of the annual U.S.-Cuba Friendshipment Caravan. “Only grass-roots pressure on Congress will get these bills passed before President Obama leaves office. Now is the time for people of faith and conscience to stand up and speak out to end this unjust policy that harms both Cubans and people in the United States.”

In a prepared statement joining the campaign, the Rev. Lennox Yearwood stated, “The proof that our efforts have worked lies in recent changes announced by the Obama administration to move toward normalizing relations with Cuba.”

Yearwood is the CEO and founder of the Hip Hop Caucus, an IFCO board member and a grass-roots faith leader. He added: “We welcome this first step toward the reversal of a blockade policy that has caused decades of pain and suffering for the Cuban people. But we know that more must be done. It’s time, while there is still time, for this president and this Congress to end the blockade on Cuba, and it is past time for this president to use his executive power to close Guantánamo prison and return Guantánamo to its rightful owners: the people of Cuba.”

Caravan participants will visit members of Congress from July 5 through July 14 and then travel to Cuba for 10 days to deliver humanitarian aid and messages of love and friendship. Since 1992, IFCO has organized 27 U.S.-Cuba Friendshipment caravans and hundreds of delegations that have delivered humanitarian aid as a direct challenge to the U.S. blockade.