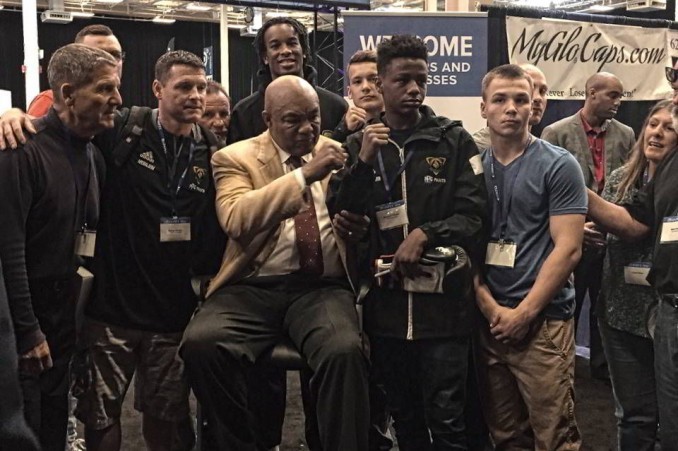 Boxing champ George Foreman with Pittsburgh youths who will box with the Cubans on July 30.

An international spotlight will shine on youth sports July 30, when young Cuban boxers meet their Pennsylvania counterparts for an exhibition match on Pittsburgh’s Roberto Clemente Bridge. The Pittsburgh Post-Gazette has called “Boxing on the Bridge” one of 2016’s “can’t miss sporting events.”

The match is sponsored by the nonprofit 501(c)3 Hibernian Celtic Athletic Fund. In its appeal for grass-roots financial support through gofundme.com/pghvscubaboxing, the fund states: “By staging this event on the Roberto Clemente Bridge we celebrate the bridge we have established between Pittsburgh and Cuba. … We want to turn the page and usher in a new, post-Cold-War era of friendly relations brought on by the recent opening of diplomatic relationships. … Aside from helping to normalize relations between the U.S. and Cuba, this event will provide some very hardworking and deserving young athletes a chance to shine on the international level.”

A T-shirt gift for donating on the gofundme site recognizes Cuban revolutionary leader Che Guevara’s Irish roots. The Hibernian Celtic Athletic Fund was established to make sports accessible for low-income Pittsburgh youth of all nationalities. For the past three years on St. Patrick’s Day, the fund has sponsored an exchange with Irish boxers called the Donnybrook.

The Cuban Constitution guarantees “access to study, culture and sports.” But in the U.S., youth sports, as well as art and music, are among the first to be cut when school district funding shrinks. “Boxing on the Bridge” builds on decades of work by the Pittsburgh-Matanzas Sister Cities Partnership. It will help build bridges with Cuba and public support for congressional action to finally end the U.S. economic, commercial and financial blockade of Cuba, which continues, despite President Obama’s March visit to the island.