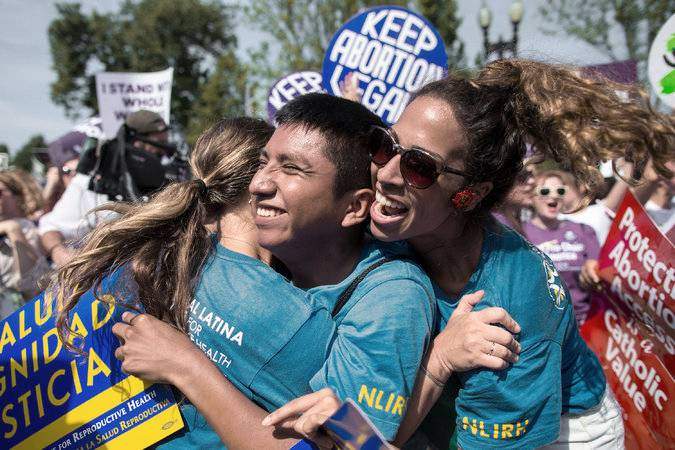 Celebrating in Washington outside the Supreme Court, June 27.

With a 5-3 vote, the Supreme Court affirmed June 27 in the case of Whole Women’s Health v. Hellerstedt that women’s constitutional right to abortion may not be subjected to “undue burden” imposed in the infamous HB2 Texas law of 2013.

This case challenged two provisions that the state alleged were needed to protect women’s health. One is that abortion clinics must be ambulatory surgical centers that meet stringent requirements, even though those are not mandated for more life-threatening procedures. The other is that doctors performing abortions must have admitting privileges at hospitals within 30 miles from where they work.

The decision, authored by Justice Stephen Breyer and joined by Justices Ruth Bader Ginsburg, Elena Kagan, Anthony Kennedy and Sonia Sotomayor, demolished both planks of the law. Breyer wrote: “Neither of these provisions offers medical benefits sufficient to justify the burdens upon access that each imposes. Each places a substantial obstacle in the path of women seeking a previability abortion, each constitutes an undue burden on abortion access, and each violates the federal Constitution.” (supremecourt.gov)

Breyer further exposed the blatantly obvious anti-woman intent of the law when he wrote: “We add that, when directly asked at oral argument whether Texas knew of a single instance in which the new requirement would have helped even one woman obtain better treatment, Texas admitted that there was no evidence in the record of such a case.”

Noting that surgical abortion is one of the safest medical procedures, Ginsburg stated in her concurrence:  “Many medical procedures, including childbirth, are far more dangerous to patients, yet are not subject to ambulatory surgical center or hospital admitting-privileges requirements.” She added, “When a State severely limits access to safe and legal procedures, women in desperate circumstances may resort to unlicensed rogue practitioners … at great risk to their health and safety.”

The law was so far-reaching that half of the more than 40 clinics in Texas had to close when it went into effect. Full implementation of the law would have reduced the number of clinics to 10 in the second-largest state with 5.4 million women of childbearing age (15-44). That would have put 900,000 women of childbearing age, about 17 percent of the state’s total, 150 or more miles from the nearest clinic.

This ruling is a decisive loss for reactionary forces, especially so-called Americans United for Life that wrote the law. Right-wing-dominated legislatures, especially in the Midwest and South, have passed hundreds of laws restricting the right to abortion — including copy-cat TRAP (targeted regulation of abortion providers) laws in Alabama, Kansas, Oklahoma, Louisiana, Mississippi, Tennessee and Wisconsin like the ones just overturned.

Reactionary lawmakers — who thought they could palm off restrictions under the guise of “protecting women’s health,” when they could no long peddle their bogus campaign for fetal rights — have become more brazen in league with the conservative current in the U.S. They have passed laws mandating medically unnecessary waiting periods, parental consent provisions and so-called “counseling” with false and misleading data designed to scare and shame women from having abortions.

Make no mistake: This win will not stop the right’s efforts to end abortion. Even the presumptive Republican presidential nominee — who flip-flopped from being pro-choice after he began running for president — has agreed to make abortion illegal. Meanwhile, Texas lawmakers and the toxic cesspool of anti-women’s-rights zealots are vowing to continue to pass laws endangering women’s lives.

The Supreme Court’s long-awaited decision is a welcome reprieve for the reproductive rights movement that has been fighting an uphill battle for over two decades since the court’s 1992 Casey decision opened the floodgates so states could pass laws restricting abortion. The only proviso standing in their way was that states do not impose an “undue burden” on women.

The racist, sexist, anti-LGBTQ, pro-capitalist right has been exposed as perpetrating lies, withholding vital information and promoting fraudulent laws that can only harm women. Specifically, the 5.4 million women in Texas — but especially poor women, low-wage workers, women of color, immigrants, youth, rural residents, lesbians and trans people, women with disabilities and victims of domestic violence. The risks for undocumented women being discovered, detained and deported at border patrol checkpoints were enormous.

Amy Hagstrom Miller, founder and CEO of Whole Woman’s Health, which led the challenge to the Texas law, said, “Every day Whole Woman’s Health treats our patients with compassion, respect and dignity — and today the Supreme Court did the same. We’re thrilled that today justice was served and our clinics stay open.” (Reuters, June 27 )

Dr. Willie Parker, board chair of Physicians for Reproductive Health, noted:  “Today’s Supreme Court ruling is an historic confirmation of a woman’s right to make her own decisions about her health, her family, and her future. Politicians can no longer use ideologically driven laws with no medical basis to threaten women’s health by restricting access to safe, legal abortion care. … The battle to protect abortion access is not over. We will continue to fight to ensure that our physicians can fulfill their deep, conscientious commitment to providing all women who need it — in Texas and across the country.”  (prh.org, June 27 )

Now the reproductive justice movement can work, in the words of Yamani Hernandez, executive director of the National Network of Abortion Funds, “to create the support and access we truly need for abortion to be not just legal, but a reality for anyone who needs it. … [and] the ability to focus on barriers like the Hyde Amendment.” (fundabortionnow.org) Ever since Hyde was instituted in 1976, denying Medicaid for abortions, it has imposed an “undue burden” on poor women who depend on the federally funded health care program.

Monica Moorehead, Workers World 2016 presidential candidate, praised the decision: “All women, but especially poor women of color, need to be able to fully exercise their reproductive options while attempting to raise healthy children. Many of these same women are single mothers in the forefront of the struggle for $15 an hour and a union.

“It is crucial that the women’s movement show solidarity with the most oppressed women who bear the brunt of racism, homophobia and transphobia in this capitalist system riddled with patriarchal views. In the long run, only a socialist society, based on equality and justice for all working and oppressed people, can provide the kind of nurturing environment and cooperative community that all people need in order to thrive.”