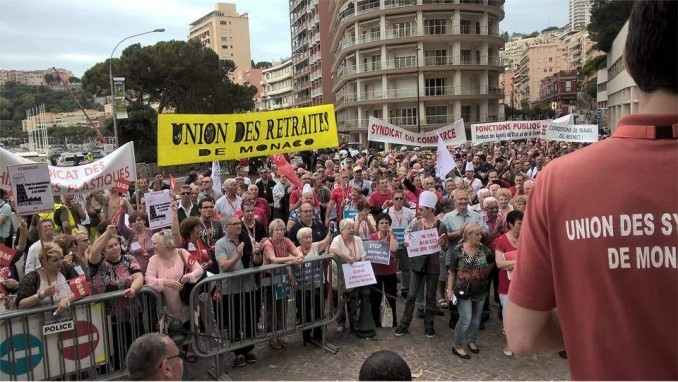 Workers in Monaco, a principality on the French seacoast, fight so that bosses can’t fire them at will.

The French government used tear gas and threatened leaders with “terrorism” charges to try to stop the protests that a coalition of unions and students, led by the General Confederation of Labor (CGT), has been waging vigorously and repeatedly since March to force the government to withdraw its new anti-labor law.

The French state has tried lying. The cops claimed that the last demonstration in Paris on June 14, which involved over 600 buses from all over France, where it took hours for demonstrators to leave the assembly site and march along a wide Parisian boulevard, drew only 75,000 to 80,000 people. A careful analysis of the data at Initiative Communiste indicates that 750,000 to 950,000 people — close to the million estimated by the unions — is the most probable figure. (www.initiative-communiste.fr)

The French state is trying intimidation. The government, under its state-of-emergency powers, issued an order forbidding 130 individuals, listed by name, from participating in the June 14 demonstration. It is even threatening to ban upcoming national demonstrations on June 23 and June 28, allegedly because there was violence and property destruction on June 14. The CGT says that this threat shows the government is losing and is on the ropes.

In comparison with the strike actions, the European soccer tournament currently being held in France has seen far more violence and property destruction. Over 332 people have been arrested throughout France, amidst scenes of massive, drunken destruction; some have already been convicted and either deported or imprisoned for a few months. (Les Echos) But there have been no government threats against the tournament.

Recently, two police agents were assassinated in Maintes-la-Jolie, a small city with a large population of North Africans. Bernard Cazeneuve, the minister of the interior, speaking on TV2 the evening of June 14, even tried to tie the assassinations to the CGT-led strikes, which he claims engender a climate of violence. President François Hollande gave the elegy at the police officials’ hugely publicized state funeral.

The CGT says it reserves the right to defend itself, and CGT security tries to keep the demonstrators safe from all attacks, including attacks from the cops.

The June 14 blog of Initiative Communiste describes how a middle-aged man suffered a serious back injury after being shot with a tear gas cannister. The June 19  New York Times has a picture of four or five cops beating a Black protester on the ground; video clips on YouTube of the June 14 protest show cops clubbing protesters on their backs as they tried to get away.

The media and government are trying to minimize the impact of the strikes that accompany these demonstrations. For example, some workers on a road near Limoges in south central France held a “snail operation” that created a 25-mile traffic jam. An action like this was mentioned in the June 15 issue of Le Monde, but less spectacular actions are purposely unreported.

Even with all the government lies blaming the CGT for violence, and the disruptions and inconveniences the strikes have caused, popular support for the unions has stayed high. Despite lack of fuel, missing trains, irregular metro service and canceled flights, the most respected French polling service (IFOP) reports support at around 60 percent.

The government actions show that it is trying to break the power of the unions, even if it has to force the new labor law through Parliament without a vote. As part of its competition with capitalists in the European Union, the French bosses aim for a working class wracked by austerity and unable to resist.

The unions, led by the CGT, are fighting hard to protect their gains and they do have a chance to win.