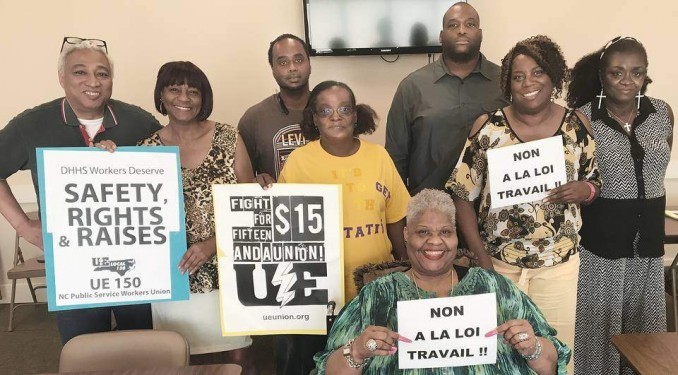 From Athens, Greece, to San Francisco, Calif., passing through Italy and on to New York City and Butner, N.C., solidarity with the struggle of the French workers protesting the new anti-worker labor law is growing.

While the French big-business media is focusing on the workers at the Total refinery, who returned to work on June 12 after shutting down the plant for 25 days, they are ignoring the strong support the French public is giving to the strikes and protests.

Even though lines at gas stations have grown shorter, but not vanished; even though public transportation — especially in the Paris region — is strongly “perturbed”; even though electricity brown-outs are common; even though roads are often blocked by protests, a large segment of the French public blames the government and big-business bosses for these problems, not the unions.

Philip Martinez, head of the CGT union confederation, speaking at a rally of garbage workers blockading a sorting center at Fos-sur-Mer in southern France, supported their determination to continue their strike against the new labor law. He said that he and other CGT leaders are receiving death threats. (TV3, June 12)

After the national protest march on June 14, Martinez will meet with Minister of Labor Myriam El Khomri on June 16, but he says he doesn’t expect many results from the meeting.