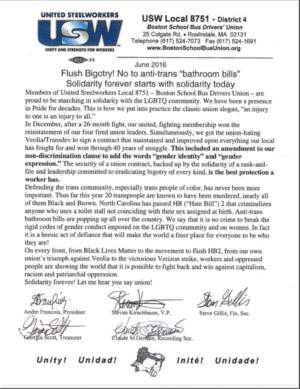 The following statement was distributed by United Steelworkers Local 8751, the Boston School Bus Drivers Union, at Boston Pride on June 11.

Members of United Steelworkers Local 8751 — Boston School Bus Drivers Union — are proud to be marching in solidarity with the LGBTQ community. We have been a presence in Pride for decades. This is how we put into practice the classic union slogan, “An injury to one is an injury to all.”

In December, after a 26-month fight, our united, fighting membership won the reinstatement of our four fired union leaders. Simultaneously, we got the union-hating Veolia/Transdev to sign a contract that maintained and improved upon everything our local has fought for and won through 40 years of struggle. This included an amendment to our non-discrimination clause to add the words “gender identity” and “gender expression.” The security of a union contract, backed up by the solidarity of a rank-and-file and leadership committed to eradicating bigotry of every kind, is the best protection a worker has.

Defending the trans community, especially trans people of color, has never been more important. Thus far this year 20 transpeople are known to have been murdered, nearly all of them Black and Brown. North Carolina has passed HB (“Hate Bill”) 2 that criminalizes anyone who uses a toilet stall not coinciding with their sex assigned at birth. Anti-trans bathroom bills are popping up all over the country.

We say that it is no crime to break the rigid codes of gender conduct imposed on the LGBTQ community and on women. In fact, it is a heroic act of defiance that will make the world a freer place for everyone to be who they are!

On every front, from Black Lives Matter to the movement to flush HB2, from our own union’s triumph against Veolia to the victorious Verizon strike, workers and oppressed people are showing the world that it is possible to fight back and win against capitalism, racism and patriarchal oppression.