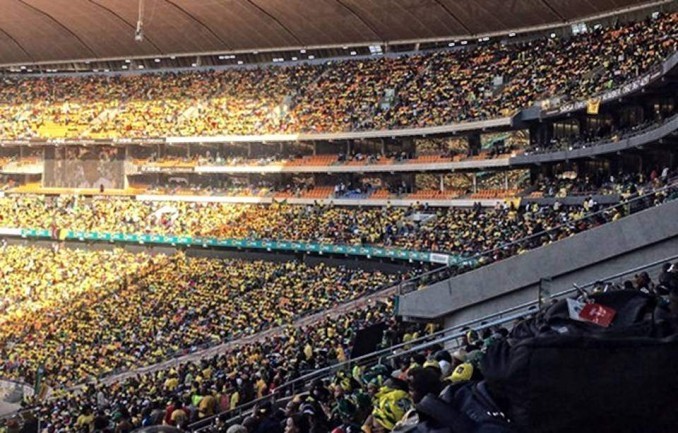 The ANC announced that over 85,000 people attended its provincial manifesto launch at FNB Stadium In Soweto on June 4

A nationwide election for local offices in 278 municipalities across South Africa will take place Aug. 3. South African officials recently announced the formation of an Inter-Ministerial Committee on Elections, which is preparing for the fourth such election since 1994 when the first nonracial vote was held on a national level, bringing the African National Congress (ANC) to power.

The IMC is led by the Department of Cooperative Governance and Traditional Affairs Minister Des van Rooyen, who is in charge of facilitating these tasks. The committee monitors the efficient conducting of the elections and guarantees that all registered voters are able to fully participate in a safe and impartial atmosphere.

An Independent Electoral Commission (IEC) is responsible for providing information on the ballot’s terms and ensuring that necessary materials are printed and distributed to centers across the country. Candidates running on behalf of political parties and as individuals will contest seats in councilor bodies and mayoral offices.

In a statement issued by the South African government on June 10, spokesperson Taksani Baloyi said: “We are now left with less than two months to ensure that we have free and fair 2016 local government elections. This, whilst we are awaiting an important Constitutional Court decision on the clarification of the challenges relating to citizens and households without formal addresses.”

More than 200 political parties and nearly 1,000 independent candidates will appear on ballots in the coming municipal elections, says the IEC. The commission has already announced that the number of participants in the August poll represents an increase of 69 percent compared to that in the 2011 elections.

The Rand Daily Mail said June 8: “South Africa has seen a relatively steady growth in the number of political parties contesting municipal elections since 2000. In that year‚ … 79 political parties … contested the various municipalities. Six years later that number grew 23% to 97 — and it grew a further 25% between 2006 and 2011.”

The report continues, “The 2016 Municipal Elections will see a record number of political parties contesting the eight metropolitan municipalities‚ 205 local municipalities and 44 district councils. A total of 204 political parties submitted candidate lists by last week’s deadline — almost 69% more than the 122 which contested in 2011. The Western Cape will have the highest number of parties contesting (77), followed by Limpopo (56)‚ Gauteng (45) and the Eastern Cape (43). The smallest number of parties will contest in the Northern Cape (18).”

The ruling ANC is facing challenges from the largest opposition party, the Democratic Alliance, and the smaller Economic Freedom Fighters (EFF).

The ANC Women’s League is calling upon the party to run at least 50 percent women candidates on Aug. 3. A list of mayoral candidates will be released by June 17. (Eyewitness News, June 13)

The ANC held a rally at the FNB Stadium in Soweto on June 4 to launch its manifesto for the upcoming elections and to mobilize tens of thousands of supporters.

During the manifesto’s launch, Paul Mashatile, Gauteng provincial ANC chairperson, stressed that supporters should conduct peaceful campaigns, adhering to IEC rules on avoiding violence. He told the crowd that the concerns of youth would be high on the party agenda. He also said he was confident that the ANC would win in all Gauteng metropolitan areas.

Additionally, Mashatile pledged that the delivery of municipal services will be improved in upcoming weeks and months. There has been an upsurge in violence at demonstrations about municipal services. These actions have created a potentially volatile atmosphere which could impact the character and outcome of the elections.

Bloomberg reported June 6: “The lead-up to South Africa’s local elections in August has turned increasingly violent as poor communities use the campaign as leverage to demand better living standards and politicians vie for control of the 278 municipalities.”

The article continued, “Communities staged 70 protests against a lack of decent housing, education and other services in the first four months of the year, up from 44 in the same period last year, according to Municipal IQ, which monitors the municipalities. Perceptions that the authorities only respond to grievances when demonstrations turn violent is fueling the unrest, according to Kevin Allan, the research company’s managing director.”

In KwaZulu-Natal Province, violent clashes occurred between supporters of the ANC and the rival EFF, headed by expelled ANC Youth League leader Julius Malema. Stones were thrown at Malema when he attempted to speak in May at a rally at Richards Bay, north of Durban. Police fired rubber bullets and teargas to disperse ANC and EFF supporters. EFF leaders claimed the ANC was attempting to prevent their organization from campaigning in KwaZulu-Natal, a charge the ruling party rejected.

This election is taking place amid an economic decline in the country, which is exemplified in a recent Standard & Poor credit evaluation, which designates the country as just one level above junk bond status.

On June 3, the ANC posted on its website that the party sought to place a positive spin on the S&P evaluation, stressing: “The decision is a reward for the collective efforts of all South Africans doing everything to put South Africa first in placing our case before the rating agencies. The President and the Minister of Finance have been working with a number of CEOs and the labor movement in trying to turn the economy around and building confidence in the economy. This comes shortly after Moody’s confirmed confidence in our economy.”

Unemployment is rising throughout the country and the value of the national currency, the rand, has been falling.

Uncertainty about relations with Washington was fueled over the last few days after the U.S. Embassy issued a warning, saying South Africa could be a target for an Islamic State attack. The ANC government refuted the security advisory, saying there were no credible threats.

Relations between the U.S. and South Africa have been strained since late last year when the Obama administration temporarily suspended Pretoria from a preferential trade agreement based on the African Growth & Opportunity Act. Earlier this year, ANC Secretary General Gwede Mantashe accused the U.S. of plotting regime-change inside the country.

These sentiments are shared by neighboring states. On June 10, in the state-run Zimbabwe Herald newspaper, correspondent Christopher Farai Charamba wrote: “One must be critical of these alerts. The South African government has labelled the information ‘dubious and unsubstantiated.’ Should this be the case then what motive would the U.S. have to issue this second alert?”

Charamba continued: “In 2013 there were reports that the Botswana government, member of the Southern African Development Community (SADC), had given the American military permission to start construction of facilities inside the Thebephatshwa air base in Gaborone. This was seen as the first step in plans to relocate the U.S. Africa Command (AFRICOM) from Stuttgart, Germany, to the Southern African country.

“Under the guise of the war on terror the USA has invaded countries, disposed governments, established military bases in a number of countries,” emphasized Charamba. “With these new alerts in what is arguably one of the most peaceful regions in the world, SADC countries should be skeptical of U.S. intentions.”