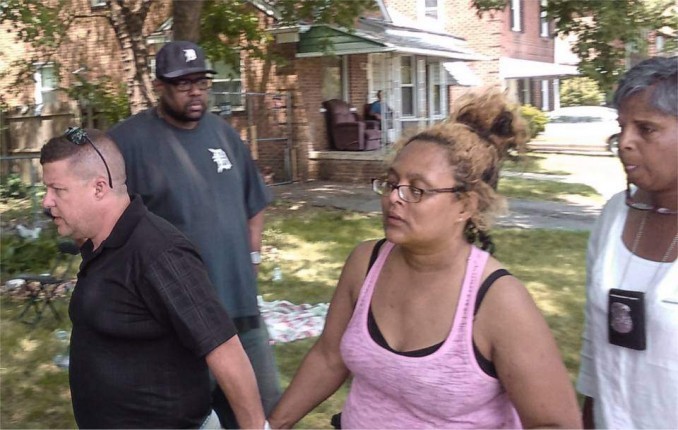 Jeanette Shannon was evicted from her Detroit home on June 3 after a protracted fight with fraudulent real estate interests and local courts that favor predatory lenders and banks.

This was a test case for the Detroit Eviction Defense (DED) coalition and other anti-foreclosure activists in the city. In similar attempted evictions during 2012 in another section of northwest Detroit, police had either withdrawn, saying it was a civil matter, or stayed away, allowing the situation to be resolved by activists through political pressure and negotiations with the courts and banks.

This time the eviction was viewed by 100 people, who turned back the dreaded dumpsters twice in two days. But the struggle to save Shannon’s home revealed further the political character of the administration of corporate-imposed Mayor Mike Duggan.

Duggan’s police officials provided protection for the bailiff and the contract laborers hired to break into the home, trash the property and dispose of Shannon’s household belongings in a dumpster parked in an alleyway next to the house.

On June 2, the court bailiff appeared at the Shannon home after 5 p.m., intending to evict the homeowner and her 17-year-old son. The storm door leading into the house was pulled off the hinge.

Several activists who had been keeping vigil in an effort to block the eviction were able to stave off the bailiff. The bailiff then told those outside the home that Shannon had to be out by the next day.

Early the next morning, when the dreaded dumpster was delivered, anti-foreclosure activists keeping watch over the home responded. Then a driver of the vehicle delivering the dumpster attacked, choked and pummeled activists, resulting in a leading member of DED, Bob Day, having his leg broken in two places.

A member of the Moratorium NOW! Coalition, Martha Grevatt, was unjustly issued a civil infraction for ostensibly refusing to move her automobile from in front of the Shannon home. Her vehicle was not breaking any parking laws. These orders were motivated by enforcement of the eviction order.

Others at the scene were threatened with felony arrests. Columns of police cars returned after noon that day and attempted to break down the front door.

Having failed to enter through the front, they walked around to the back and barged the door open. They refused access to Jeanette Shannon so she could retrieve her cats. She was later allowed to enter the home to rescue her pets from the bailiff and the hired hands, who went about hauling possessions to the dumpster and boarding up the house. 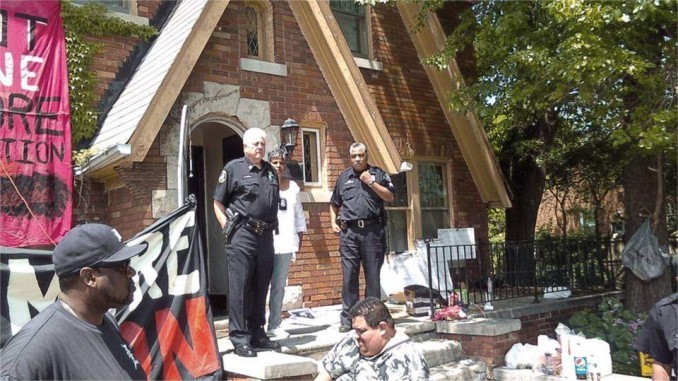 High-ranking Detroit police stand guard over the eviction of Jeanette Shannon. The bailiff is standing between the two uniformed officers.

DED, along with other social justice and labor activists, rallied to the defense of the Shannon home due to the compelling character of the case. Similar scenarios have proliferated across the city stemming from the real estate and banking collapse of 2007-08 that left tens of thousands of vacant homes, many of which have been turned over to unscrupulous “developers” and the notorious Detroit Land Bank Authority.

A number of these so-called real estate developers are given preference in purchasing the properties through auctions conducted by Wayne County and the DLBA. The homes are often sold on “land contracts” because, despite ruling-class propaganda that Detroit is being revitalized with property values and rents increasing, the banks wrote less than 500 mortgages during the entire year of 2015.

After purchasing homes from land contract companies, the residents soon discover there are property tax and other liens on the homes. Others discover they do not even own the homes, since their names do not appear on the deeds.

In the specific case of Jeanette Shannon, according to an entry on the DED website, “Shannon purchased her Detroit home in 2010 from Thor Real Estate LLC for $15,000 on a land contract — with an understanding that the company was responsible for paying the property taxes, and that the amount for taxes was added into her monthly payment. But the year after she moved in with her daughter and son, she was shocked to be told by Thor’s attorney that her house payment was being jacked up by almost $100 a month to pay the property taxes. That threw her in a panic and she hired an attorney she found through a friend of a relative, who said she was an expert in real estate law.” (detroitevictiondefense.org)

As is frequently the situation among Detroit residents, “It was then,” reported the DED website, “that Shannon discovered that Thor LLC hadn’t paid any property taxes since 2008, two years before her purchase of the property. When she contacted the city, they told her that the property tax debt had been sent to the County.”

The county of Wayne is designated to collect not only its portion of taxes on properties but also those delinquent payments assessed by the Finance Division of the city of Detroit. Late fees and charges accumulate at the rate of 18 percent annually.

These inevitable burdens placed on homeowners are compounded by the fact that actual appraisals of Detroit homes have not been effectively carried out in two decades, since the 1990s, when banks engaged in predatory lending, in part, by overinflating the worth. Residents would then borrow money against these arbitrarily designated values.

Typically the courts in Wayne County side with the real estate firms and the banks. Only public pressure from activists has won residents’ rights to remain in their homes.

All this is taking place even as the Michigan State Housing Development Authority (MSHDA) on June 1 received $188 million in federal funds, ostensibly aimed at foreclosure prevention and blight removal.

A struggle is now being waged by the Moratorium NOW! Coalition to Stop Foreclosures, Evictions and Utility Shut-offs to release the federal funds to those who need them. Other organizations are also endorsing the effort, which is targeting not only the Treasurer of Wayne County for not vigorously pursuing the utilization of the federal monies to assist homeowners to remain in these properties, but also the MSHDA and the U.S. Department of Treasury.

The Treasury Department issues the funds and is allowing them to be funneled into the Detroit Land Bank Authority, where massive fraud by administrators and functionaries is currently under investigation by the Department of Justice. So-called “blight removal” efforts are the source of the corruption, as well as the process of emptying the city of its African- American and working class population.

The MSHDA held its monthly board meeting on May 25 in Lansing. The proceedings were streamed to its offices at the state office building at Cadillac Place in the New Center area of Detroit.

A delegation from the Moratorium NOW! Coalition and supporters attended the meeting. During the public comment section they blasted the board for not directing these limited resources to pay delinquent property taxes and water bills for residents of Detroit and Wayne County.

Another action is being planned for the Treasury Department, which by turning over hundreds of millions to MSHDA and the DLBA is facilitating the forced removal of people from Detroit. These efforts will continue over the next several months through various forms of protests and agitation, according to Moratorium NOW! Coalition organizers.