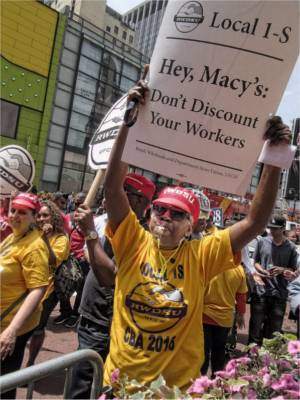 Workers in service jobs continue to rise up as 5,000 union members at New York-area Macy’s department stores voted unanimously to go on strike on June 15 when their contract extension expires. The main issues are health care, pay and work schedules. The workers are represented by Local 1-S of the Department Store Union.

But these workers weren’t asking for a miracle. Instead, the local’s informal band blared out Aretha Franklin’s anthem, demanding: “R-E-S-P-E-C-T!” They handed out fliers explaining: “Macy’s has been making demands that would limit workers’ pay and weaken benefits. It’s time to stand up to corporate greed. … They shouldn’t take from the workers who make this company run.” (1srwdsu.org)

Workers at the rally revealed that pay starts at $9 an hour, while the bosses are now trying to block new city and state laws raising the minimum wage to $15 an hour. The company offers new workers fewer benefits, such as sick time, and tries to keep most workers part time. One worker told this reporter that the company has made working on holidays ­mandatory.

Supporters at the rally included members of the Laundry Workers Center and Make the Road, as well as members of the Communications Workers and International Electrical Workers unions, recently victorious in their struggle against corporate giant Verizon.