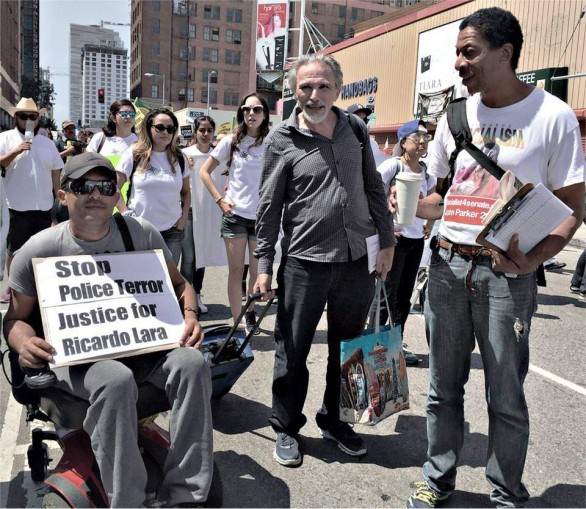 John Parker, on right, at May Day rally in Los Angeles.

The U.S. presidential campaign is being deluged by racist backwash from the Republican Party’s presumptive nominee Donald Trump. But in California one congressional candidate, John Thompson Parker, is countering those vile tactics with revolutionary emphasis on the importance of the Black Lives Matter movement, the need to end police brutality against Black and Brown people, and a fightback against environmental racism.

Parker, a member of Workers World Party, is on the California ballot as the Peace and Freedom Party candidate for U.S. Senate. People registered to vote in California who are against racism and for working people can vote for Parker. His revolutionary socialist campaign can be reached at socialist4senate.org.

Parker’s campaign spotlights ongoing police violence against people of color, including anti-immigrant deportations and murders by the U.S. Border Patrol and racist vigilantes. He points out that almost every other day in California a person is shot by the police — often people of color — yet not one cop has been charged. Proposed legislation that would have taken police brutality cases out of the unwilling hands of prosecutors was killed with the complicity of Attorney General Kamala Harris, California’s top cop. Harris is also running for U.S. Senate as a Democrat.

Parker points out the crimes against children because of environmental racism, like the lead contamination left in the soil of 10,000 homes by Exide Technologies in the predominantly Latina/o community of Vernon, Calif. The children there have been permanently and irreversibly affected by lead poisoning, like the children of Flint, Mich. No serious action — neither sufficient money for cleanup or evacuation nor prosecution of corporate executives in charge — has been taken by California Democratic or Republican politicians, from the governor to the attorney general.

As a revolutionary socialist, Parker presents an analysis that exposes how this inaction can continue in the face of obvious injustice: Both Democratic and Republican parties are tied to the big banks and corporate interests that actually run the U.S. The big-money bosses require that politicians serve as virtual puppets of capital and take no action to significantly cut into the profits and private ownership of industries.

Parker’s proposal? Put the ownership of the banks and major industry into the hands of the people, so that the vast majority of the workers and oppressed can determine their future, not the less-than-1%.

Since that revolutionary goal cannot be achieved by the ballot alone, why is Parker running? In campaign literature, he points out he has extensive experience in building peoples’ movements — the force required to create a revolutionary future.

A vote for John Parker is a vote of confidence toward building an independent revolutionary socialist movement to free working-class and oppressed people from the bondage of the two parties of capitalism. California voters can be registered in any party or as an independent and vote for Parker in the open primary for the U.S. Senate on June 7.