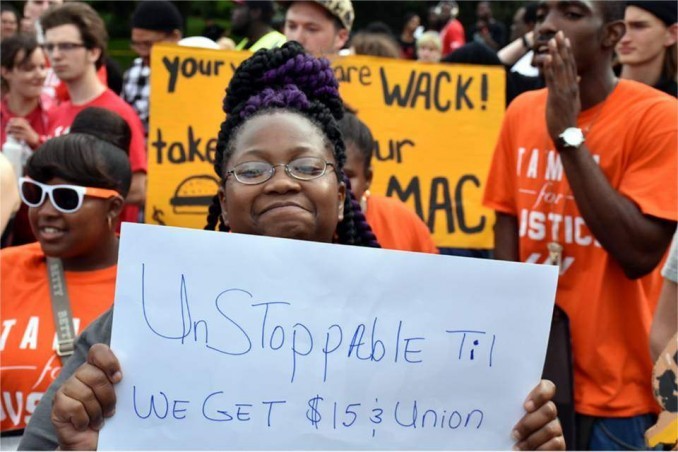 Despite heavy rains and winds, fast food workers and their supporters converged May 25 on McDonald’s corporate headquarters in Oak Brook, Ill., a western suburb of Chicago. Despite the storm, 100 tents were set up so McDonald’s workers could occupy the street overnight, in advance of the shareholders meeting the following day.

On the morning of May 26, they were joined by thousands of other low-wage and community activists who had marched to McDonald’s huge 80-acre corporate campus where the shareholders’ meeting took place. Organized by Fight for $15, large contingents of majority Black and Latino/a workers demanding $15 an hour and a union came from cities including Detroit, New York, Pittsburgh, Philadelphia, New Orleans, St. Louis, and Chicago, as well as from Florida, Texas, Virginia and other states.

For the third year in a row, McDonald’s closed most of its buildings for the protest. More than 300 armed police on foot and bikes and in cars were able to block repeated attempts by workers to get past police barricades.

While executives and shareholders have enjoyed salary hikes and gains in stock dividends, most of the company’s 660,000 front-line workers make far less than a living wage at McDonald’s 14,000 U.S. restaurants.