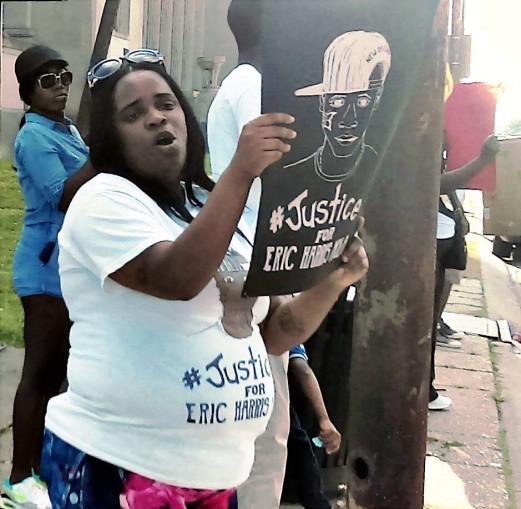 New Orleans — Eric Harris, only 22 years old, was killed here last Feb. 8 by a hail of bullets from the guns of two Jefferson Parish Sheriff’s deputies. Calling for justice for their loved one and an end to the horrendous murders of Black youth by police, Harris’s family has bravely demonstrated near Orleans Parish Courthouse every Tuesday for five weeks. They’ve been joined week after week by organizers, activists, youth and community supporters — Black and white.

The deputies are still patrolling the streets of Jefferson Parish today. The family of Eric Harris and their supporters demand the killer cops be fired, arrested, indicted and convicted. The partner of Eric Harris, Tyshara Blouin, was in the car that night and, against the odds, survived the barrage of bullets.

Blouin publicly contradicted the account of the shooting given by the deputies. She was subsequently arrested and charged as accessory to Harris’s supposed “assault” on the cops. Family and supporters see this outrageous charge as an act of retaliation.

Keep up with this story, support the family of Harris and support Blouin, whose court case is scheduled in the coming weeks. Follow and spread ­#JusticeForEricHarrisNOLA on social media.

Police murder is at epidemic levels in “the land of the free.” One indication: “NOLA” (New Orleans, Louisiana) had to be added to the hashtag because another Black youth named Eric Harris had already been killed by cops in Oklahoma.