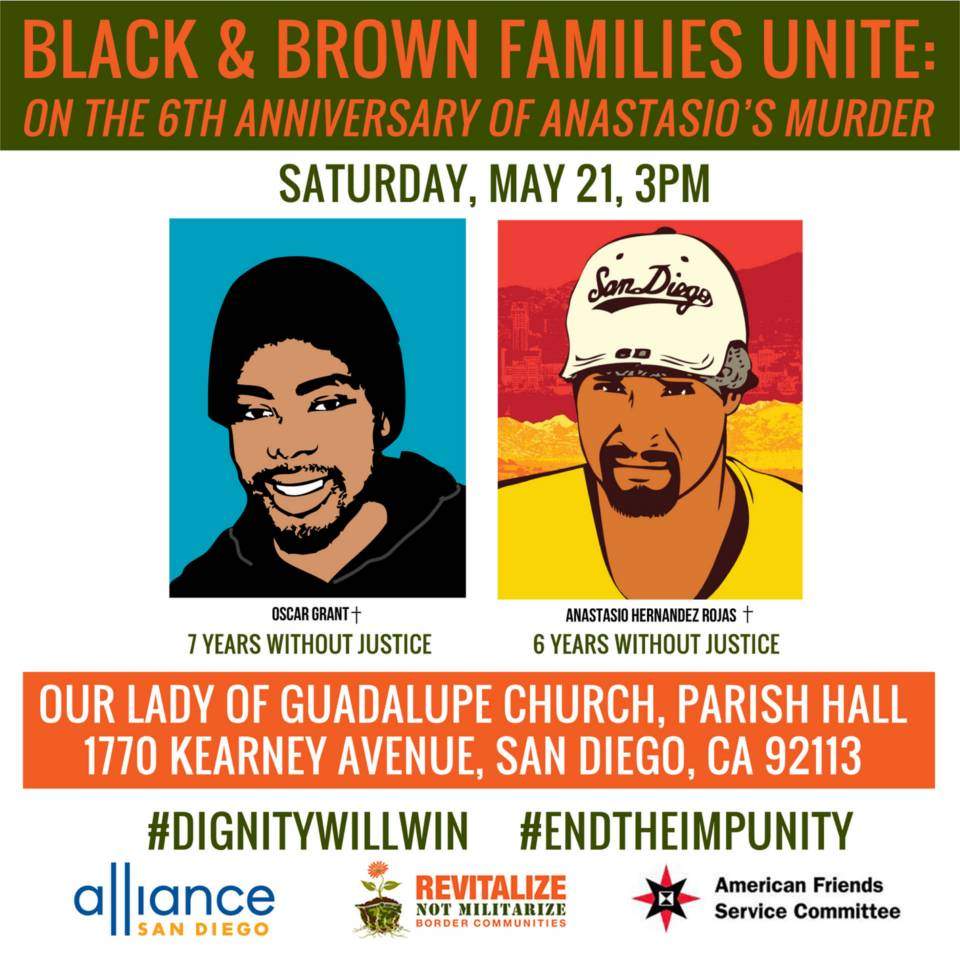 Families from San Diego’s African-American and Latino/a communities met at Our Lady of Guadalupe Church on May 21, the sixth anniversary of the murder of Anastasio Hernández Rojas. They held a panel discussion titled “Black and Brown Families Unite: Demanding Law Enforcement Accountability.”

The panelists were María De La Cruz, mother of Hernández Rojas; Jack Bryson, the father of a friend of Oscar Grant who was with Grant when he was killed; Brandon Duncan, hip-hop artist and activist; and DeWayne Harvey, the father of Aaron Harvey.

The panelists each told their stories, beginning with Dwayne Harvey, whose son is one of 33 young Black men jailed and charged with associating with gangs that the authorities link to nine shootings around the area. San Diego District Attorney Bonnie Dumanis had these young men charged under California Penal Code 182.5, a racist statute used to arrest Black youth for having done nothing more than supposedly associate with supposed gang members who have been accused of crimes. Aaron Harvey had no criminal record before his arrest but could face 25 years in prison.

Brandon Duncan, a rapper and another one of the San Diego 33 jailed under the racist statute, told of the events leading to his arrest and of his imprisonment. “I spent seven months in jail, literally fighting for my life,” Brandon said.

María De La Cruz spoke of her son, Anastasio Hernández Rojas, who was brutally tortured and murdered by over a dozen Customs and Border Patrol thugs at the San Ysidro border crossing into Tijuana, Mexico, on May 28, 2010. This brutal incident was caught on video by a passing pedestrian, but six years later there is still no justice.

Spanish-to-English and English-to-Spanish translation via headphones was available at the meeting. Following the presentations, the floor was opened for discussion, questions and comments on what we can do together to stop police terror in our communities.

The program concluded with cultural performances by Mujeres en Resistencia and a powerful spoken word performance by Mi-Ocean Rice.

In the more than 90-year history of the Border Patrol, never has an agent been successfully prosecuted under federal law for the killing of border residents. Over the last decade, police brutality in communities of color has become a largely overlooked epidemic. Whether the law enforcement agency is U.S. Customs and Border Protection or the local police force, Black and Brown communities must unite to combat abuse.

People at the meeting were encouraged to vote, get involved, join an organization, stay informed and share what they learn with others.

It happened that the same day as the meeting, Democratic presidential nominee Bernie Sanders was in San Diego for several events. Sanders found time to visit the ugly scar of the border wall that separates San Ysidro and Tijuana with María Puga, the widow of Hernández Rojas, and supporters. Sanders expressed his solidarity with their struggle for justice and with the struggle of a group of U.S. military veterans who, because they are undocumented, have been deported to Tijuana.