Lilly is WWP’s vice presidential candidate in the 2016 elections. The following article is based on a talk given at a Workers World Party forum in New York City on May 20. To view a video of the talk, go to youtu.be/AfrZ54-3BCk.

Thursday, May 19, was the 91st revolutionary birthday of Brother Minister El-Hajj Malik El-Shabazz — Brother Malcolm X. Born on May 19, 1925, he was brutally assassinated at the Audubon Ballroom on Feb. 21, 1965, in New York City. It would be just like Malcolm to request that we not only lift his name in love and respect but also the names of Yuri Kochiyama, Lorraine Hansberry and Brother Ho Chi Minh, all of whom share his birth date.

The way Malcolm was evolving, he would want us to recognize all their contributions to the struggle. This was the same Malcolm X who said, “I, for one, will join in with anyone, I don’t care what color you are, as long as you want to change this miserable condition.” 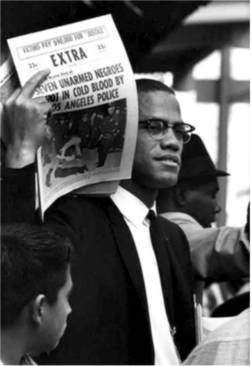 Unfortunately, comrades, we’re still living in many of the same conditions that Malcolm was preaching about in 1964 and 1965: racism and Jim Crow; police murders of Black men, Black women and Black babies; church burnings; mass incarceration; poor housing; and third-class living conditions. Tamir Rice was no different than Emmett Till. The poverty then is the same poverty now, even worse. The same imperialism. The same police state.

But Brother Malcolm did leave a blueprint of what needs to be constructed through work and collective struggle.

That’s the time we’re living in right now — a renewed period of work and struggle. A new generation of young freedom fighters has stepped forward, comrades! We’re talking about teenagers and youth. And Brother Malcolm X is right back in the swing of things, right back on the front lines from the depths of his grave.

No one is being studied and paid more homage right now than Brother Malcolm X, at least among the movement’s Black youth. Sister Beyoncé put Brother Malcolm X front and center on her new album “Lemonade,” which instantly went global.

When I heard that live vocal sample on the album, I couldn’t help but think of Sister Sandra Bland, murdered by police in a Texas jail cell; Rekia Boyd; Renisha McBride; and seven-year-old Aiyana Stanley-Jones, murdered by Detroit police while she was sleeping. For all the criticism she’s received, for Sister Beyoncé to put Malcolm X on her album like that was actually quite revolutionary.

As of last month, you have Black girls — girls of color all over the world, as young as six years old — googling Malcolm X now, reading about him, writing about him, learning about him, listening to his speeches. Not in the public school system, but on their own independent, free-thinking terms.

A good friend of mine, Dr. Ashley Farmer, who’s currently working on her postdoctoral degree at Duke University, just published a major academic article on Malcolm X. It’s entitled, “The Many Women Mentors of Malcolm X.” A must-read, it was published via the African American Intellectual History Society on May 3 and has been widely circulated ever since.

As the state has clamped down and decent employment has dried up — as the conditions have worsened and white supremacy has once again mounted an ugly surge via the Trump campaign and the Ku Klux Klan’s new membership drive down South — the oppressed youth have sought guidance in an old friend. The youth in Ferguson, the youth in Baltimore, the youth in Palestine, Black girls and Black boys are again discovering Malcolm X for the first time.

Not only was Malcolm ahead of his time regarding the role of women, he was thinking, traveling and organizing internationally in the early 1960s, long before social media or the Internet.

Today, we have Facebook and Twitter, which is how our Palestinian comrades were assisting the struggle in Ferguson during the 2014 rebellion. Malcolm didn’t have that, but he did organize a very similar network of friends, allies and comrades — in Cuba, Ghana, Egypt, Algeria.

When I was in Lebanon last year for the International Forum for Justice in Palestine, it was the youth from Algeria and Tunisia who knew all about Malcolm X. I learned firsthand that Malcolm X is still a bridge of international working-class struggle.

Malcolm stated in 1964: “It is incorrect to classify the revolt of the Negro as simply a racial conflict of black against white, or as a purely American problem. Rather, we are today seeing a global rebellion of the oppressed against the oppressor, the exploited against the exploiter.”

One of the current and most beautiful aspects of the Black Lives Matter movement is this new emphasis on things “Black.” Not only do Black lives matter, but the masses of Black youth are now “unapologetically Black,” redefining what Black Power means for a new generation.

If you haven’t noticed, Black youth are now wearing their hair natural again. The young sisters today have said the hell with straightening their hair. They’re rocking their “locs,” braids and cornrows — the short doobies, their natural coils and twists. It’s a reflection of a political and cultural shift.

If you don’t have any pride in who you are, how in hell can you be a good freedom fighter? If you don’t love the people, how can you serve the people? You have to love yourself and love the people, then you’ll have a cause to fight for — a worthy cause, a noble cause, a righteous cause — the kind of cause that will make you sacrifice for the next generation — out of love, out of pride and solidarity. We learned that from Brother Malcolm X.

It was Malcolm X who gave us that, comrades — not only 50 years ago, but today in 2016. And the young people have taken that and run with it. So let’s help them go as far as they can with it. Cointelpro [the murderous U.S. government program which targeted progressives and revolutionaries, especially African Americans and other people of color] thought they had killed Malcolm, but the youth are keeping him alive. In the words of El-Hajj Malik El-Shabazz, “The future belongs to those who prepare for it today. In all our deeds, the proper value and respect for time determines success or failure.”