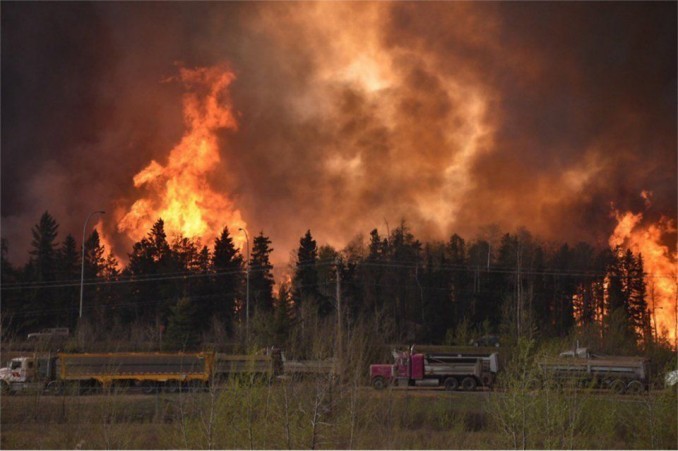 The fire that began on May 1 southwest of Fort McMurray, Alberta, Canada, has consumed over a million acres of Canadian territory, the size of Rhode Island, and is still burning as of May 23. Only a good soaking rain and cool weather will put it out — something unlikely until the fall.

When, after a few days, the fire reached Fort McMurray, a small, diverse city of nearly 90,000 people, Albertan provincial officials then called for a “mandatory evacuation.”  There is only one road in and out of the city, which was created to house those servicing the tar sands sites just to its north. Work camps near Fort McMurray were also evacuated as a precaution.

The fire spread so rapidly that 25,000 people had to flee north; most evacuees went south, however, where the bulk of Alberta’s people live.  Some people left with just the clothes on their backs, but there were no deaths due to fire. Two people fleeing died in a car crash.  Families were split up and scattered around, and many people needed counseling for post-traumatic stress disorder, especially those who escaped through a raging fire.

Some people from First Nation (Indigenous) communities were evacuated to homes by boat.

The initial estimates for property lost that are covered by insurance was $6 billion (Canadian). But the Canadian media have stopped reporting the damage costs because the extent of the destruction in Fort McMurray is still unclear.  Some neighborhoods were completely destroyed, some partially and some were almost completely spared.

What this means is that nearly 100,000 people — mainly workers — lost their homes and now will have to discover what insurance companies will offer to reimburse them. These companies benefit from a policy of “deny, delay and dispute.” Renters and people living in the Fort McMurray First Nation generally had no insurance, and many of the First Nation offices and community buildings in the city were destroyed.

First Nation communities in Alberta, both north and south of the city, have provided significant amounts of aid — water, food, gasoline — to the refugees. Fort McKay First Nation, about 90 miles south of Fort McMurray, sheltered 3,000 refugees. Alberta is about 6 percent Indigenous.

According to the May 22 Financial Post, many of the skilled trades who do summer work in the oil sands weren’t hired and are unemployed when they had expected to be working.

Firefighters were able to protect most of the infrastructure. About 90 percent of the existing homes in Fort McMurray have had their electricity and gas restored, and the Albertan premier has announced that a phased reoccupation of the city will begin around June 1. Air quality is still poor; one day it was so high that emergency workers in the city needed respirators.

Causes of the fire

Fort McMurray is in the midst of a boreal forest, similar to those covering about 60 percent of Canada’s land area. Boreal forests contain mainly conifers, whose needles, when they drop off, are highly flammable under dry conditions.

This past winter in western Canada, there was almost no snow. This spring’s warm weather due to climate change and a strong El Niño left the floor of the boreal forests particularly dry. A few lightning strikes were enough to set off this huge fire.

The carbon pumped into the atmosphere by the production and burning of coal and oil, including oil from tar sands, is one of the root causes of climate change.