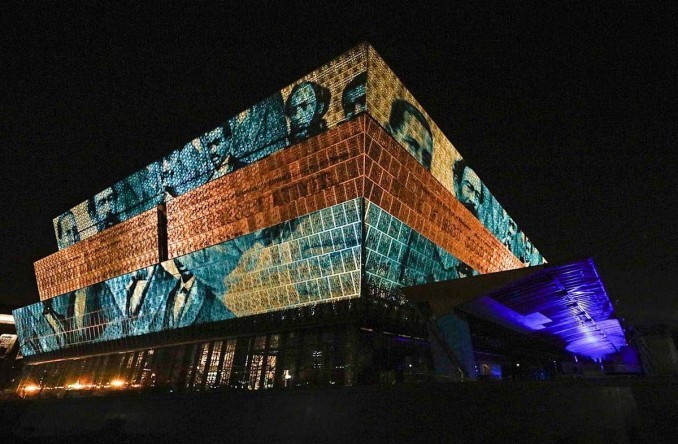 A center designed for the preservation and exhibition of the contributions of people of African descent in the United States is scheduled to open later this year. Known as the National Museum of African American History and Culture, the building represents efforts to construct such a project that extend back over 100 years.

This will be the largest of such institutions in the country, surpassing the Dr. Charles H. Wright Museum of African American History in Detroit. The NMAAHC, a 400,000-square-foot edifice, will be the 19th division of the Smithsonian Institute in Washington, D.C. President Barack Obama is scheduled to cut the ribbons at the building opening on Sept. 24.

During the second week of May, journalists were allowed to preview what is in store for the public. The structure will feature numerous galleries with displays on slavery, segregation and the Civil Rights Movement, also music, entertainment, sports and politics.

Much work remains to be done before the official opening. Electrical equipment, artifacts and artistic treasures will be moved in and fitted for public viewing. There are exhibits on cultural figures, including Bo Didley, Little Richard and the Jackson Five.

The May 15 New Observer says: “After years of false starts, a bill from Democratic Rep. John Lewis of Georgia to create the museum passed Congress in 2003 and became law with the pen of President George W. Bush. Three years later, the Smithsonian’s Board of Regents approved the five-acre site on the Mall between the Washington Monument and the National Museum of American History. Lead designers Freelon Adjaye Bond/SmithGroup were selected in 2009 and construction began in 2012.”

The article continues, “The $540 million project was funded through a partnership with Congress, which provided half the money, or $270 million. The other half is being raised through private contributions; officials are within a few million dollars of that goal.”

There are 3,000 artifacts with videos, photos and wall text which will be on view in 11 inaugural exhibitions. Dozens of staff must be accommodated in offices, and the 400-seat cafeteria has to be set up. For security purposes, metal detectors will be installed at the two entrances.

The museum’s official website reads: “In many ways, there are few things as powerful and as important as a people, as a nation that is steeped in its history. Often America is celebrated as a place that forgets. This museum seeks to help all Americans remember, and by remembering, this institution will stimulate a dialogue about race and help to foster a spirit of reconciliation and healing.” (nmaahc.si.edu)

The website also emphasizes: “Additionally, the museum will use African American culture as a means to help all Americans see how their stories, their histories, and their cultures are shaped and informed by international considerations and how the struggle of African Americans has impacted freedom struggles around the world. Finally, as a 21st century institution, the museum must be a place of collaboration. We must be a truly national museum that reaches beyond Washington to engage new audiences and to collaborate with the myriad of museums and educational institutions, both nationally and internationally.”

NMAAHC is steps away from the Washington Monument, the towering obelisk built in commemoration of the nation’s first president who owned slaves. Even though the official narrative of U.S. history suggests that the so-called “Revolutionary War” was fought to gain independence from British colonialism, Africans remained enslaved in the U.S. until the conclusion of the Civil War in 1865.

That contradiction is startling in light of the racist system’s failure to guarantee a decent life, genuine equality and self-determination to the African-American people, even in the 21st century. African Americans have achieved enormous gains over the last century-and-a-half since the end of slavery. Nonetheless, they remain an extremely exploited and repressed people.

Today African Americans are incarcerated at rates far exceeding those of whites, who continue to represent the overwhelming authority within the state and economic structures of the country. Rates of joblessness and poverty disproportionately affect African Americans, while the world economic recession of the last decade appropriated much of the limited household wealth accumulated since the rise of industrialization in the 20th century.

In foreign policy, people of African descent in the U.S. have only made a progressive impact through their own propaganda, petitioning and mass demonstrations. For decades, successive administrations maintained close and fraternal relations with European colonial powers that carried out genocidal policies against territories in Africa, the Caribbean and Latin America.

In 2016, the Pentagon and CIA still install counterinsurgency programs across Africa amid broadening mistrust of U.S. intentions among the masses of workers, youth and farmers in the continent. Meanwhile, the volume of trade between the U.S. and emerging African states has declined in the last several years despite the country’s first self-identified president of African descent.

At present the largest existing African-American museum is in Detroit, a majority African-American city. This center was founded through the decades-long visionary work of the late Dr. Charles H. Wright. He started the museum in a residential house in 1965 at the height of the Civil Rights Movement. Wright was an admirer of the African-American artist, actor, activist and social scientist Paul Robeson.

In the 1980s, Wright campaigned for the release of African National Congress leader and then-political prisoner Nelson Mandela, as well as other South African political prisoners. Under the administration of Mayor Coleman A. Young, the first African-American mayor in Detroit, construction was initiated of a city-administered museum in the late 1980s.

Several years later an even larger museum was built in the area — now known as Midtown — near Wayne State University and the Detroit Medical Center.

A Liberation Film Series screens documentaries on a myriad of issues impacting African people worldwide and examining the lives of such historical figures as Malcolm X, Thomas Sankara, Frantz Fanon, to name a few. Every August the Wright Museum sponsors the African World Festival founded by Dr. Wright in 1983 on the Detroit Riverfront at Hart Plaza.

These institutions are important in their role of providing historical memory and assessments. They will only maintain relevance if they are linked to the overall struggle for the complete liberation of African-American people.