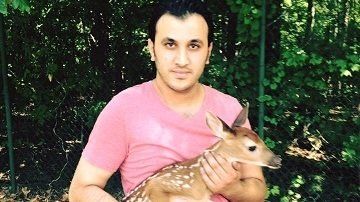 Lumpkin, Ga., May 12 — On April 17, Alaa Ismail Yasin, a 27-year-old Palestinian who has been held in Stewart Detention Center since September, stopped eating.

Operated by the Corrections Corporation of America, Stewart is the second-largest immigrant detention facility in the country and is located in rural southwest Georgia. Stewart County ranks among the highest in the state for unemployment and poverty among its largely African-American population.

Yasin arrived at the for-profit detention center around the time detainees protesting the deplorable conditions and lengthy holds had gone on a hunger strike. The protest was violently ended by armed guards entering the unit and placing many of the participants in solitary confinement.

Stewart has been the focus of widespread concern by immigrants rights and human rights organizations, with resistance actions by detainees and numerous annual protest marches and rallies organized by Georgia Detention Watch at its gates.

Immigration officials say Yasin, who was arrested in Wake County in North Carolina, violated his student visa by helping out at his uncle’s pizza restaurant and must be deported.

However, Yasin was born in the West Bank, which is under Israeli military occupation. The U.S. does not recognize Palestine as a state and he is not an Israeli citizen. There is no country that can accept him. He is technically a stateless person.

Under U.S. immigration rules, each detainee’s case must be reviewed after six months if their deportation has not occurred. Those who are determined not to pose a “terrorism” threat, a danger to the public or a flight risk must be released if the government has not been able to deport them.

Yasin’s review and release should have been in March. Despite efforts by his lawyer, his sponsor, and family and friends in North Carolina, Immigration and Customs Enforcement kept stalling on resolving his case. So the young Palestinian determined to force the issue by declaring his refusal to eat until he was released or allowed to go back to the West Bank.

On May 10, ICE attempted to get legal permission from a judge to force-feed him via a nasal tube. In their argument before the court, they claimed that his possible death would create a dangerous disturbance among the detainees. Although Yasin had lost more than 20 pounds in the course of his three-week hunger strike, the judge ruled against the request.

On May 12, Yasin ended his hunger strike but vowed to his supporters that he would continue to press for his release.

He has been placed in solitary confinement for 29 days.

A petition demanding that ICE free ­Yasin is at georgiadetentionwatch.com.