Looking through the magnified sights of an anti-tank weapon in the Lugansk People’s Republic, I experienced a moment of deeper understanding of the stakes in the anti-fascist struggle in Ukraine.

It came as I was visiting a camp of Prizrak, the “Ghost Brigade” anti-fascist militia, on the outskirts of Kirovsk in the northwestern part of the independent Lugansk People’s Republic.

I was surrounded by volunteer fighters, not only from Donbass and Russia, but from India, Spain, Italy, Norway and several other countries, women and men. Young communists and antifascists, internationalists living in the most difficult conditions imaginable, their sleeping quarters dug into the earth, subject to torrential rains and hail, surrounded by the shrapnel, exploded shells and burned-out vehicles from past battles.

Several days earlier, Ukrainian forces had attacked a nearby bus stop in an attempt to advance. They were pushed back. Now the Prizrak fighters were digging trenches to prevent another advance by the better-equipped enemy forces.

Through a magnifier I had a better view of the Ukrainian base just across no-man’s land, which was visible to the naked eye from our position. In addition to tents, vehicles and people moving around, I could see two flags. One was the Ukrainian national. The other was the black and red flag of the fascist Right Sector.

A second moment of understanding came the next day, May 9. Celebrated as Victory Day throughout the former Soviet Union, it marks the final defeat of Nazi Germany by the Red Army and partisan forces in 1945, after the loss of more than 27 million Soviet lives.

I was in Lugansk, capital city of the Republic, where I participated in the Victory Day parade with the Lugansk Communists and Komsomol. 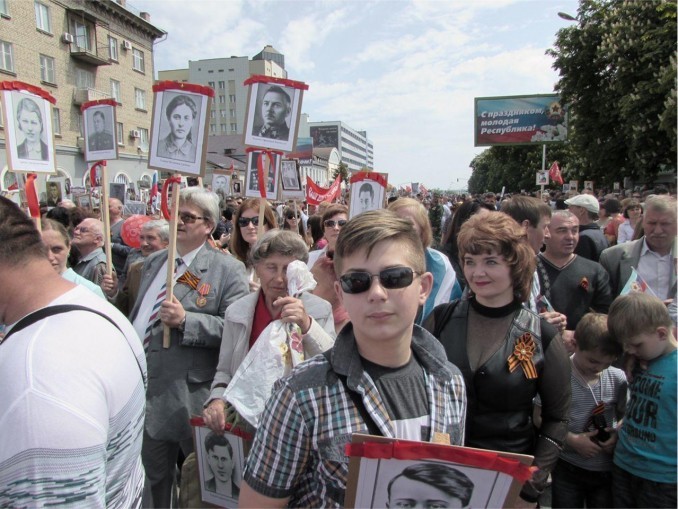 Victory Day parade in Lugansk, May 9.

Coming out of the Communist Party office in the city center, I saw tens of thousands of people streaming down the main street to the gathering site: youth, elders, veterans, workers, parents with young children, teenagers. Almost all were carrying signs bearing photos of relatives who had fought and died in the Great Patriotic War, as the Soviet anti-fascist struggle in World War II is called. Many carried the Victory Flag, the hammer-and-sickle banner of the Red Army division that had entered Berlin and planted a red flag on the Reichstag.

As I entered the crowd, I thought how difficult it would be to explain this experience to people back home. I’ve been to many demonstrations, including some very large ones, probably bigger than this, but the feeling of single-minded unity and determination was something I’d never felt before.

This was not only a deeply felt day of history, shared tragedy and triumph over nigh-impossible odds seven decades earlier. I remembered that just two years ago, fascists had been at the gates of Lugansk again — shells were destroying apartment buildings, schools and hospitals. A woman was literally torn apart on the street in front of a government building occupied by the anti-fascists. Tanks were on the roads, and there was gunfire on the streets.

Wreckage of yet another U.S. war

On our way to Lugansk, we had stopped at a memorial by the side of the road: a wrecked tank, only about a mile from the city. In the spring of 2014, the four-person tank crew had volunteered to hold the line against advancing Ukrainian forces, to give the anti-fascist resistance time to prepare to defend the city. All those in the tank were burned alive.

Tank memorial on the outskirts of Lugansk.

In just the few minutes that we international visitors pulled over to photograph the memorial, at least half-a-dozen cars driven by locals pulled over, too. Families brought flowers and ribbons to lay on the tank, an offering of memory and thanks, heaped on top of dozens and hundreds left earlier.

On Victory Day I stood beside Lisa Chalenko, two years old. She was an infant when Lugansk was besieged. Her parents remember that time only too well. Thousands of other parents, children, teenagers and grandparents in Lugansk also remember.

For them — and for people throughout the Donbass republics, in Odessa, in Ukraine — the struggle against fascism is not history. It is their life, now, today.

I’ve returned home. And while here, in the heart of imperialism, in the belly of Wall Street, it is difficult to find anyone who has heard of the war in Donbass, and too many self-proclaimed leftists and progressives would rather ignore or even condemn the resistance in Donetsk and Lugansk.  There everyone understands that the Ukrainian junta, the fascist gangs, the constant, murderous ceasefire violations could not continue for a single day without the support of the United States.

It’s time for the anti-war movement and the left to get serious about supporting this struggle and awakening the workers, the youth and progressive movements to its reality.

Because this war, this struggle, isn’t going away.

Everyone I spoke to during my eight-day visit to Donbass agreed on this point — from soldiers to political activists, students and parents, journalists and taxi drivers. 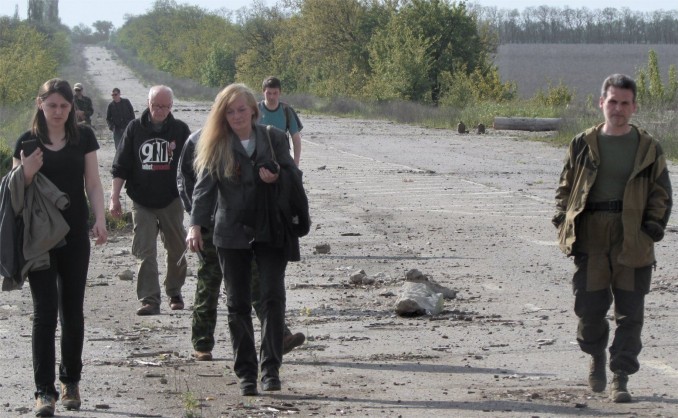 I visited the city of Donetsk, capital of the Donetsk People’s Republic, for a few days before going to Lugansk for an International Antifascist Conference in Krasnodon on May 7. While I was there, I had the opportunity to see firsthand what U.S. support for the Kiev junta means.

Donetsk is a beautiful city, a Soviet city, full of culture and wide boulevards, parks and universities built for the enjoyment of the working class — in that region, primarily miners and metal workers. This was the most working-class region of Ukraine before the war, its population imbued with socialist aspirations despite two-and-a-half decades of capitalist wreckage.

The leaders of the Donetsk republic have worked hard to rebuild and establish a sense of normalcy for the city’s people despite the war and economic blockade. But just a few minutes’ drive from the city center and you are back on the front lines of the war.

I rode with Janus Putkonen, director of Donbass International News Agency, to the outskirts of Donetsk. He showed me the highway and railroad that used to connect Donetsk and Lugansk, now cut off by the Ukrainian occupation forces. The sound of gunfire rattled nearby.

We drove to the village of Octoberski, a Donetsk suburb. Markets, apartments, a theater burned out and demolished. Row upon row of small houses and businesses destroyed by Ukrainian shelling — roofs collapsed, whole sides of buildings torn off, a cemetery shelled. And in the distance, the gutted remains of the Donetsk airport.

For those who continue to live here, mostly in larger apartment buildings, shattered windows are boarded up rather than replaced because everyone understands the destruction will come again.

At night, the sound of shelling continues. When I was there in the first week of May, things were relatively quiet — an informal ceasefire over the spring holiday week. But in the second week, the shelling of Donetsk and other cities and villages resumed and intensified.

The war isn’t over and there’s no end in sight. Why? The residents of the Donetsk and Lugansk republics are certainly tired of war and blockade. But they are unwilling to surrender to Kiev, and they know that if they did, the result would be genocide. That is the program of the fascist battalions that hold up the neoliberal junta and of neo-Nazis in the government, like the new head of parliament, Andriy Parubiy.

The Ukrainian military has more weapons, more soldiers, more vehicles. But the rank-and-file drafted soldiers are demoralized. Only the neo-Nazi battalions, who receive training from the U.S. military, are motivated to fight.

The people’s army in Donetsk and Lugansk, made up mostly of local residents, is very motivated to defend their homeland and families. Although many of the soldiers have been demobilized, tens of thousands can be brought under arms within 72 hours, if necessary.

The only way for Ukraine to win the war against the independent republics, says Putkonen, is through NATO airstrikes of the kind used against Yugoslavia. But that would mean an air war on the very border of the Russian Federation.

Neither side can back down, Putkonen says. Russia’s government knows that if it withdrew its promise to aid the Donbass republics, it would be next on Washington’s hit list. If the U.S. and NATO were to back down, that would inspire a domino effect of resistance throughout the region.

There is only one acceptable solution, in which people in the United States have an important part to play.

That is the overturn of the neoliberal, neo-Nazi, oligarch regime in Kiev, aided by the growth of a powerful anti-war movement in the U.S. to prevent the Pentagon and NATO from intervening.

The children of Lugansk, the elders living in basements near the front line, the working people of the Donbass republics are doing their part. They are waiting for us.