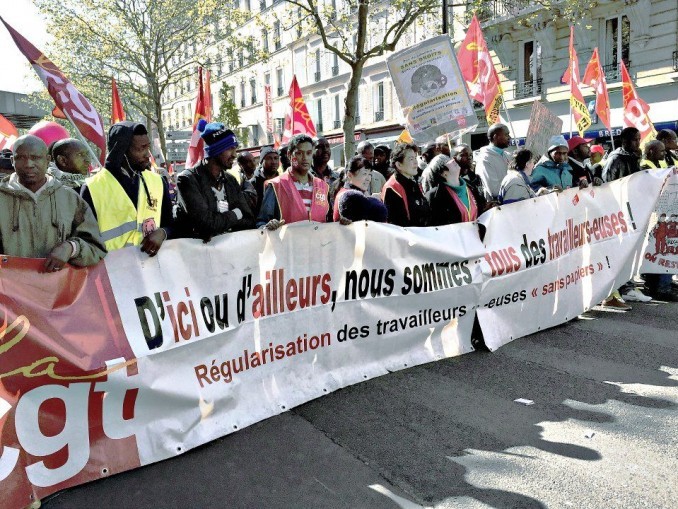 Paris == Upwards of 100,000 workers and students took to the streets of Paris and other cities across France on International Workers Day, just three days after 170,000 workers held a one-day general strike on April 28 against proposed labor “reforms” that would remove protections and benefits workers have won over decades of struggle.

Two hours after the demonstrators set foot off Paris’ Bastille Square, police chose to confront around 200 youthful protesters near the front of the march, blocking the way. In full riot gear, including shields and clubs, cops launched tear gas and stun grenades at the marchers. The youth responded with bottles and rocks.

After two hours of confrontation, police withdrew, letting marchers proceed toward the Place de la République, where students and young workers have held ongoing “Up All Night” (“Nuit Debout”) occupations since March 31. France’s President François Hollande’s proposed labor reforms would make it even harder for students and younger workers entering the workforce to secure full-time work.

The labor changes, currently being debated in the National Assembly of France, would also abolish the current 35-hour maximum workweek, remove protections against excessive overtime and facilitate layoffs.

Workers along the parade route held their ground against police disruptions. Massive contingents organized by the General Confederation of Workers (CGT) carried signs opposing the labor reform. The Communist Workers’ Party of France (PCOF) and the New Anti-Capitalist Party also had large contingents.

The working class in France showed its international character throughout the march. A large contingent of undocumented workers marched within the CGT ranks. Further back, banners reflected the struggle of workers from Latin America and Africa.

A delegation from the U.S., in France to observe the tenth anniversary of the naming of a street for political prisoner Mumia Abu-Jamal, also participated with their banners. Across France, May Day marches took place in 300 other cities.

The growing and unrelenting struggle against the anti-labor bill appears to be having an impact. While the government has softened some provisions of the bill, it reportedly still lacks enough support to be adopted by France’s National Assembly, where a vote is scheduled for May 19.

Piette was part of the Mumia Abu-­Jamal delegation.