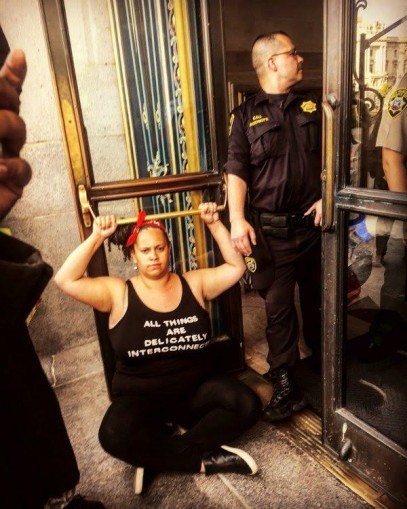 Inspired by the stamina of the “Frisco Five” hunger strikers, hundreds of chanting supporters occupied the rotunda and grand staircase inside City Hall for seven hours on May 6. Their demand, “We won’t leave City Hall until the mayor fires Greg Suhr,” refers to the top cop complicit in a string of police murders of Black and Brown people in the city.

Dubbed the #Frisco500, the protesters held their ground after the 8 p.m. closing time. Then, in a two-hour struggle, baton-wielding sheriff’s deputies finally succeeded in shoving, hitting, poking, pepper-spraying and dragging them all from City Hall by 10:30. There were 33 arrests and many injuries.

Protesters cited Chief Suhr’s long record of justifying the police killing spree, even in circumstances — as in the cases of Luis Gongora, Mario Woods, Alex Nieto, Kenneth Harding and Amilcar Perez-Lopez — where there was absolutely no justification for the use of lethal force.

Meanwhile, the Frisco Five — Cristina Gutierrez, her son Ilyich Sato, Ike Pinkston, Sellassie Blackwell and Edwin Lindo — were hospitalized after two weeks with no solid food. A day after the battle at City Hall, they decided to end their 17-day hunger strike, at the urging of their supporters, with a call to step up the struggle to end police impunity. “It started with five of us fasting outside the Mission Police Station. Now it’s the #Frisco500,” they said. “Up next is the #Frisco5000.”

Four days earlier, 300 marched from Mission Station, led by the Frisco Five in wheelchairs pushed by medical students in white coats who’d been monitoring the fasters’ condition. The marchers briefly took over the major intersection at Market and Van Ness, where a young Black singer gave a slow, moving interpretation of Sam Cooke’s “A Change Is Gonna Come.” By the time they reached City Hall, the crowd had swelled to nearly a thousand. A huge banner stretched across City Hall steps: “No Consequence, No Confidence. Stop Police Impunity.” People chanted: “Back up, back up, we want our freedom, freedom. Racist-ass cops we don’t need ‘em, need ‘em.” Also, “How do you spell murder? SFPD” and “SFPD-KKK.”

While the hunger strikers were upstairs in their wheelchairs, challenging the Board of Supervisors to take police murders seriously, people outside held a speakout. One said, “This has a long history. When the Black Panther Party was formed in Oakland, what were they doing? Trying to stop racist policing in the Bay Area.” One person gave a possible reason for Democratic Mayor Ed Lee’s inaction on the police: that he’s under consideration to be ambassador to China if Hillary Clinton wins the election.

Art Sato, longtime jazz programmer at KPFA radio and father of one of the hunger strikers, said: “As a Japanese American born in a U.S. concentration camp, I want to say to my son, I’m proud of you. I’m proud of Asians for Black Lives.” San Francisco-born, Filipino-American poet Tony Robles read a poem for the Frisco Five: “It took a hunger strike to make me feel alive in a city that feels dead. I’m proud to see the Frisco that I knew, once again.”

The movement to fire Chief Suhr, stubbornly resisted by the city’s political establishment, is nevertheless gaining momentum. The California Federation of Teachers executive council has called for his firing and for the indictment of the police who killed Mario Woods. San Francisco Jobs With Justice has called for “new leadership” in the police department. There is also outrage over revelations of a second barrage of racist and homophobic text messages by city police.

Mayor Lee has been touting alleged “investigations” of police behavior, which have been ongoing for years without producing any visible reduction in police killings. Recently a three-person Justice Department delegation went to a meeting of the Justice 4 Mario Woods Coalition. Community members raked them over the coals for being “fake investigators” whose purpose was to whitewash the police murders and cool out the community. Minister Chris Muhammad, of the Nation of Islam, sharply questioned the DOJ emissaries, forcing them to admit they had no investigatory powers and were only in San Francisco to “do an assessment” of the situation.

The community is not placing much faith in paper investigations. Their focus is now on direct action to force change. As Alyssa, champion tweet journalist from the days of Occupy Oakland, tweeted from inside City Hall during the May 6 occupation: “I’ve been to a lot of protests … but never seen people hold so strong as tonight, nonviolent but strong and serious. So much respect for the #Frisco500.”