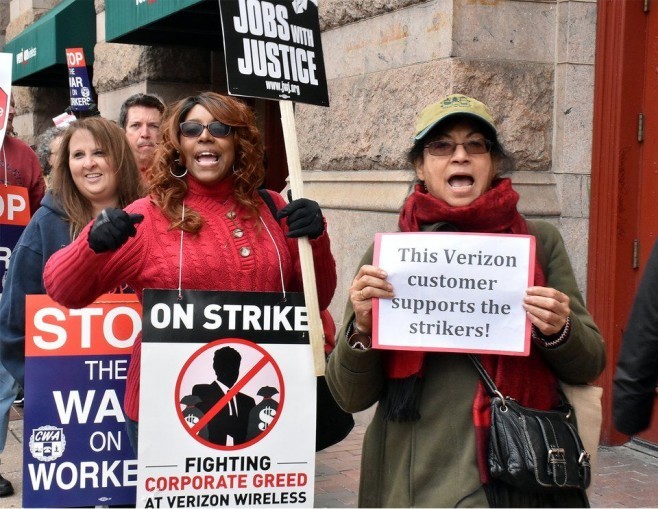 May 9 — Workers on strike against communications giant Verizon are staying strong. On May 5, a militant National Day of Strike Action was held, with the multinational working class across the U.S. answering the unions’ call with a groundswell of support and solidarity.

The 36,000 members of the Communication Workers (CWA) and International Electrical Workers (IBEW) unions are entering the strike’s fourth week in nine Eastern and Atlantic Coast states. The workers perform demanding “wire-line operations” — installation, repairs and technical support for landlines, high-speed Internet and television services. Their nonstop call center work, every second monitored by Verizon, is rated the third most stressful job in the country. (tinyurl.com/zwtu5nk)

Verizon demands that workers accept “forced relocation” assignments, losing their jobs unless they take any assignment within 80 miles of their current job. This would have workers commuting to their jobs two to four hours a day, with additional transportation costs, as well as having to leave home before dawn and getting home too late to do more than say “good night” to their loved ones.

On May 1, International Workers’ Day, Verizon cut off all health benefits to strikers. CWA issued a statement that “no striking member or family member will go without medically necessary health care during the strike” and pledged to pay the costs. CWA noted Verizon made a $4 billion profit off the workers’ labor in the first quarter of 2016 alone and said the company’s “heartless move” proved the strike’s necessity. (tinyurl.com/zl9cmjo)

Thousands of workers rallied May 5 at over 400 protests supporting the strikers, who are holding the line for workers’ rights. A wide spectrum of people participated, including those in states where Verizon workers aren’t striking, workers in other unions, workers not yet represented by unions and community activists fighting for justice on many issues.

People’s Power Assembly in New York at National Day of Strike Action, May 5.

In Albuquerque, N.M., union leaders organized a militant protest outside a Verizon shareholders meeting. Four days after Verizon canceled all striking workers’ health insurance, the company’s shareholders voted not to limit “golden parachute” severance payouts for management, even if triple the executive’s base salary. In response, union members and community supporters dropped a 70-foot banner that read, “Verizon: Good Jobs, No Greed,” across the busy Rio Grande Boulevard and lay down on the banner, blocking traffic. Fifteen people were arrested as 250 supporters continued to protest outside the meeting.

At a raucous May 2 unity rally in ­Dewitt, N.Y., a suburb of Syracuse, striking workers taunted a giant blow-up rat with a sign proclaiming Verizon CEO Lowell McAdam “the biggest rat of all.” McAdam had shown up in person at the call center picket line, attempting to intimidate the workers, which is a violation of National Labor Relations Board rules. Support at the rally included CWA and IBEW locals from Binghamton, Buffalo, Elmira, Syracuse and Utica, as well as members of the Teamsters, teachers, postal workers and office workers unions. United Auto Workers Local 624 retirees showed up — local legends because, even as the company closed their plant around them, they steadfastly refused a “last, best and final” offer because it lowered their wages to $15 an hour. Striking workers at the rally answered the insulting Verizon “last, best” offer they’d just received by flinging the letters down as trash in front of the Verizon building.

The New York City People’s Power Assembly observed the National Strike Day of Action in Union Square in front of the Verizon Wireless store, handing out leaflets, picketing and shouting pro-union chants for two hours. Some shoppers turned back from going inside. At one point the PPA picketers entered the store, making clear to the workers inside that the protest supported their right to unionize as well as “wire-line” workers. Verizon Wireless workers at some stores have elected union representation, but Verizon refuses to acknowledge them. Management called cops in to remove the activists, but they did not budge until they were ready to move on to their next action. (from Tony Murphy)

In Philadelphia, members of CWA, Philadelphia Jobs with Justice and other activists came out on May 5 to picket the Verizon store near Jefferson Station on Market East, letting Verizon and passersby know its workers deserve fair pay and benefits. (from Joe Piette)

Workers came together in Huntington, W.V., to picket Verizon Wireless in solidarity with CWA and IBEW workers. Members of the Service Employees, Steelworkers and Letter Carriers unions took to the street. The Appalachian Workers Alliance took part as well.

Picket lines, sponsored by CWA locals 2204 and 2201, are up in Roanoke, Lebanon and all over the rest of Virginia at Verizon call centers and tech sites. Despite injunctions and other challenges, both active and retired members are in good spirits, keeping the pickets strong. When it was learned scabs were staying at a Holiday Inn in Lebanon, Va., site of a call center and picket line, they didn’t stay there long, after receiving a hearty southwest Virginia welcome! Many strikers are women, many of them African American. Union jobs at Verizon are some of the only jobs left with decent wages, benefits and safety conditions. And being union, these workers have anchored communities across Virginia for decades. (from Bryan G. Pfeifer)

Striking Verizon workers from CWA Local 2204 drove more than three hours on May 2 from southwest Virginia to a rally in Durham, N.C. Joining them in solidarity were members of Electrical Workers Local 150, the North Carolina Public Service Workers Union; “Raise Up for 15” low-wage workers; “Black Lives Matter for Deriante Miller” (Miller was a Black youth killed by an North Carolina state trooper); and campaigners against a new jail and for a People’s Budget respecting the labor of city workers. (from Dante Strobino)

In Charlotte, N.C., a solidarity picket was organized at a Verizon store following a leaders’ training session of members of “Fight for 15” from throughout the South. Many attending are part of the on-going Southern Workers School, busy developing workers’ organizations in “right-to-work-for-less” states. Folks from the Charlotte CWA and IBEW locals helped organize and attended the rally. Picketers got out leaflets to cars and street traffic at rush hour. The rally was highly visible, with a great response from passersby, including some who joined the action for a short time. (from Ben Carroll)

CWA Local 9415 and supporters from the community picketed a Lakeshore Avenue Verizon Wireless store in a crowded Oakland, Calif., shopping district. Passersby were very supportive, with a number of drivers honking in solidarity. Picketers held a banner and signs as they distributed flyers and talked to shoppers about the strike. Other Bay Area pickets were held in Berkeley and San Francisco. (from Terri Kay)

Boston workers and activists are holding a monster “I Stand with Verizon Workers” lunch-hour march near downtown City Hall on May 11. Striking IBEW Local 2222 has been a rock of support for community and other union struggles, including the successful two-year fight against mega conglomerate Veolia/Transdev carried out by the Boston School Bus Drivers, Steelworkers Local 8751.