On Sept. 5, 2014, a group of Palestinian popular organizations called on people around the world to step up the Boycott, Divestment and Sanctions movement to economically weaken and isolate the apartheid state of Israel.

The message, signed by over a dozen Palestinian workers’ organizations, included a call for “Working within trade unions to raise awareness about Israel’s regime of oppression and engaging in effective BDS measures such as stopping the handling of Israeli goods, divesting trade union funds from Israel and complicit companies, and boycotting complicit Israeli trade unions.” ­(bdsmovement.net) 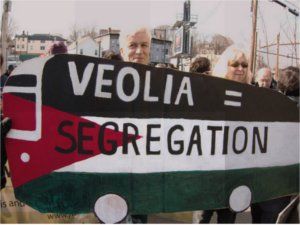 A Palestinan flag on a school bus is a symbol of the Bus Drivers Union solidarity with Palestine. When Veolia Corporation attacked their union, the bus drivers publicized Veolia’s role in illegal Israeli settlements in the West Bank.

U.S. unions, some of which backed the movement to defeat apartheid in South Africa, have largely ignored this plea for solidarity. “An injury to one is an injury to all” seems to have been forgotten when it comes to opposing the racist Zionist state.

Nevertheless, the BDS movement just got a shot in the arm. Units of two United Auto Workers locals, representing graduate student teachers at the University of Massachusetts-Amherst and New York University, have endorsed BDS.

From April 12 through April 14, the University of Massachusetts Graduate Employee Organization unit of Local 2322, the largest unit of the amalgamated local, conducted a vote of its 2,000 members. Over 95 percent supported a resolution to “join the global movement for Boycott, Divestment and Sanctions.” In a four-day election ending April 22, over 65 percent of the 2,000 members of the Graduate Student Organizing Committee-UAW Local 2110 at New York University followed suit. 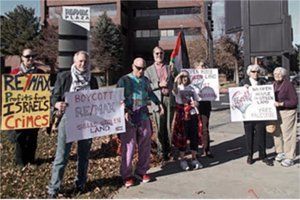 “We know that our principled stand will be criticized, scrutinized and challenged,” said GEO co-chair Santiago Vidales. “But we know that we are building a movement for liberation. The liberation of Palestinian people is inherently connected to our own.” (geouaw.org)

In 2014, UAW Local 2865, which represents graduate student employees in the University of California system, passed a resolution supporting BDS. A right-wing minority in this local then appealed the membership’s majority vote to the union’s International Executive Board under the UAW’s internal appeal process.

The IEB ruled in favor of the minority, saying that the resolution would cause a loss of jobs at UAW-represented military contractors. Local 2865 responded by appealing the IEB’s ruling. A decision is expected this year.

Over 20 organizations have issued statements or passed resolutions in support of Local 2865. Among them are UAW Local 4121 at the University of Washington, the Palestine Solidarity Collective in Syracuse, N.Y., and the rank-and-file group Autoworker Caravan.

The United Electrical workers passed a resolution at its 53rd national convention last August supporting BDS and calling for an end to U.S. aid to Israel.

In October, an Israeli law firm filed a charge against the UE, claiming that its support for BDS constituted a secondary boycott. This charge attempts to use the viciously anti-labor Taft-Hartley Act, which prohibits unions from targeting third parties not directly involved in a labor dispute. Such a “third party” might be a store that sells products made by scabs. In January, the National Labor Relations Board dismissed the charge.

Many unions around the world, including Unite the Union in Britain and the Congress of South African Trade Unions, are supporting BDS. It is time for the U.S. labor movement to stand with Palestine and reject Israeli apartheid.