Saint-Denis, France — Back on April 30, 2006, the Paris suburb of Saint-Denis took a courageous and principled stand in naming a newly constructed street after U.S. political prisoner Mumia Abu-Jamal, who was on death row in Pennsylvania at that time.  That defiant act sparked a frenzy of efforts to remove the sign, led by the Philadelphia Fraternal Order of Police with backing from U.S. corporate media and politicians. Their reactionary campaign continues to this day.

However, this April 30 Saint-Denis Mayor Dedier Paillard, along with other city officials and residents, marked the tenth anniversary of their historic act of resistance to racist state pressure, gathering in front of the slightly battered but clearly visible marker for Rue Mumia Abu-Jamal that has defied all efforts to tear it down.  They were joined by representatives from other cities in France that had named Abu-Jamal an honorary citizen. Nine members of a delegation from the U.S. also participated in the ceremonies.

Following the street commemoration, a lunch and artistic performance were held at a nearby school, where the U.S. delegation presented Saint-Denis with a commemorative plaque. 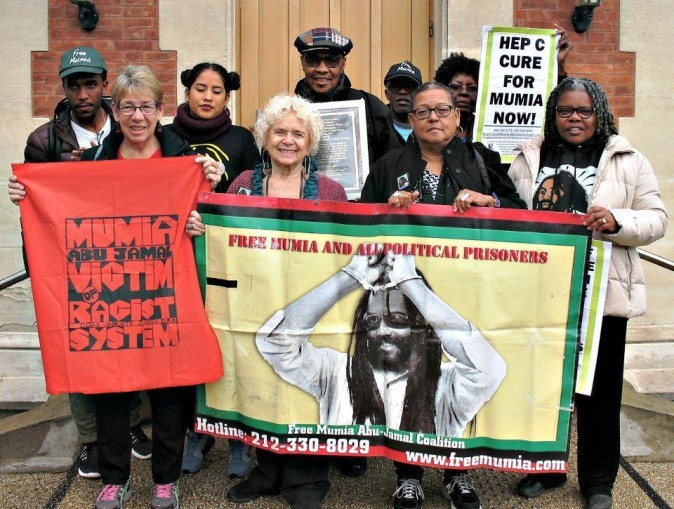 Participants in the delegation included Abu-Jamal’s brother, Keith Cook, also an activist with the NAACP in North Carolina; the Rev. Renee McKenzie of the Church of the Advocate, a historic Black church in Philadelphia strongly engaged with the struggles of Black people; Estela Vazquez, first executive vice president of Local 1199-SEIU, the major U.S. hospital workers’ union; Marylin Zuñiga, a young teacher whose third-grade class sent Mumia get well cards when he was near death in 2015, resulting in her immediate firing after pressure exerted by the FOP; Betsey Piette with the anti-police brutality group, the Philadelphia Racial, Economic, and Legal Justice Coalition and Workers World Party; Johnnie Stevens, with the International Action Center (NYC), a community organizer and videographer; Alma Pendleton with the Free Mumia Abu-Jamal Coalition (NYC); Nyle Fort, minister, organizer and scholar based in Newark, N.J., and a student in Religion and African-American Studies at Princeton University; and delegation coordinator Suzanne Ross, representing the International Concerned Family and Friends of Mumia Abu-Jamal.

A majority of the 100,000 people living in Saint-Denis are immigrants and people of color. One can hear languages from 130 different nations.  At a welcoming reception for the U.S. delegation on April 29, the mayor said: “We hear here the echoes of all struggles, including Palestine.  The naming of this street is not just an act of resistance, it is an act of struggle.”

Saint-Denis has a long history of naming its streets after individuals who have contributed to the global fight against colonialism, racism and imperialism.  The city has a Rue Amílcar Cabral and a Rue Nelson Mandela. However, said Paillard: “It is very rare for the city to name a street after someone who is still alive. Having this street for Mumia helps our city take a stance in the struggle for liberation of all people.”

Paillard noted that the last 10 years have been marked by extreme political changes in France, including cuts in education and recent attacks on workers’ longstanding rights. The street naming ceremony came just days after hundreds of thousands of French workers, students and youth took to the streets on April 28, for the fourth time in two months, to demand that the government withdraw a new labor law that would eliminate the 35-hour work week and other benefits.

Protests in most major French cities included a one-day general strike that shut down thousands of worksites, schools and universities. The day after the Saint-Denis ceremony, an estimated 84,000 to 100,000 workers and students flooded the streets of Paris and other French cities on May Day — International Workers’ Day.   The French Parliament is slated to officially begin discussing the new law on May 3.

The law would have a particularly egregious effect on workers in Saint-Denis. Many are under 30, and most make half the average wage found in other areas in France.  With growing gentrification over the last 15 years, more than a quarter of Saint-Denis’ population can’t afford housing in Paris. In response to this crisis, Saint-Denis has created “social housing” for 80 percent of its residents so they can remain in the city.

“We can’t stop the ‘free’ market but we can keep control of space and grounds to prevent market speculation,” Paillard told the delegation.  In the last 12 years, Saint-Denis has also added six more schools, including the one where the commemorative lunch was held. Under French law the municipality is responsible for education facilities while the state pays for teachers’ salaries — severely underfunding those in Saint-Denis.

The tenth anniversary embodies the international solidarity that time and again has proved critical to winning victories in the struggle, including Abu-Jamal’s release from death row in December 2011. It contributes today to the fight to demand that the Pennsylvania Department of Corrections provide Abu-Jamal and other Pennsylvania prisoners with desperately needed medicine to cure hepatitis C.

French supporters of Abu-Jamal have sent over 3,000 signed petitions to support the demand that Abu-Jamal get the medicine he needs.  Petitions are still being collected and can be signed online through www.iacenter.org/mumiahepcsign.  Signed petitions will be delivered to Pennsylvania Gov. Tom Wolf in Harrisburg, Pa., at a date to be determined.

The example set by the people of Saint-Denis is one that speaks to the global power of oppressed peoples to struggle against all odds, knowing that without struggle there can be no victory.  It is with this understanding that the fight must continue until Mumia Abu-Jamal, an innocent man, ultimately wins his freedom from prison.