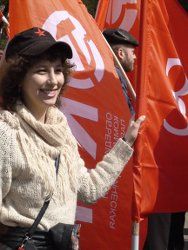 Moscow — With enthusiasm, colorful displays of red pride, and slogans against capitalist oligarchy and the rising fascist threat in Ukraine, communist youth and workers took to the streets of Moscow to mark International Workers’ Day on May 1.

This year, May Day coincided with the celebration of Orthodox Easter Sunday. Many upper- and middle-class Muscovites had already left the city on holiday, and the streets were unusually quiet. But that didn’t stop working-class people who uphold the socialist traditions of the first workers’ state, and those struggling for a new socialist transformation in Russia, from coming out in force.

The day began with the traditional mass march organized by the Communist Party of the Russian Federation (KPRF) and its allied organizations. Thousands of people, from youths to senior veterans of the Red Army, gathered at October Square in central Moscow near a massive monument to Russian revolutionary leader V.I. Lenin. They marched out in columns waving red flags and banners.

Some revolutionary left organizations also formed contingents, such as Anti-Imperialist Action, which carried the flags of Cuba, the Democratic People’s Republic of Korea, Syria, the green flag of assassinated Libyan leader Moammar Gadhafi, and other countries struggling against U.S. imperialism. Groups of communists from abroad living in Russia, including supporters of the former socialist state of South Yemen, also marched with their flags.

This big march also witnessed the public debut of the New Communist Movement, made up of dedicated activists hailing from Russia and several other former Soviet republics.

With their striking flag of a hammer and sickle emblazoned on the sun, and a militant May Day statement printed on bright red paper, organizers told Workers World that their goal was to reach out to young communists and other workers who they believe are dissatisfied with the frequently reformist and nonstruggle politics of the national KPRF leadership.

Meanwhile, other organizations held their own marches and rallies to emphasize their revolutionary positions. 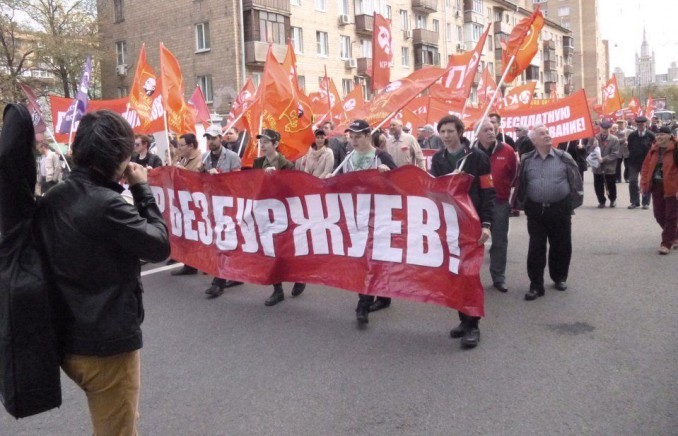 In another part of the city, the Left March assembled, organized by the United Communist Party (OKP) and its allies in a coalition to support anti-fascists in Ukraine and the Donbass republics. This demonstration had a more militant tone. Hundreds of youth, workers and veterans gathered near the famed Moscow Zoo under the bright red banners of the OKP and the Union of Communist Youth (CKM), as well as the Independent Union of Transportation Workers, the banned Ukrainian Marxist organization Borotba and others.

Activists marched through a historic Moscow district that had been at the heart of the 1905 revolution of poor and working people against the Russian czar.

Led by Moscow OKP organizer Denis Somer and members of the CKM, they chanted militant slogans against capitalism and oligarchy, in defense of the historic gains of socialism in the USSR and against the fascist danger in Ukraine. They also chanted “One solution! Revolution!” in English.

As OKP international secretary Darya Mitina waved a large Soviet flag at the front, the energetic action drew attention from passersby. Many took flyers and some joined the march.

Marchers entered the plaza of the Metro station named for the 1905 revolution, where a dramatic monument immortalizes the sacrifices of that historic struggle. The area was festooned with flags of all the republics of the Soviet Union while revolutionary songs played.

A rally featured speakers from the OKP, CKM, the organization of Moscow women workers, the Independent Union of Transportation Workers and the Other Russia movement. This writer spoke on behalf of Workers World Party from the U.S. and brought greetings from the New York May Day March for Workers’ and Immigrants’ Rights.

Another march and rally, sponsored by the Red Front and the Russian Communist Workers’ Party (RKRP), was also held that day.

Afterwards, communist youth from several organizations, including some who had attended different marches, ate together and celebrated the internationalist traditions of the working class.