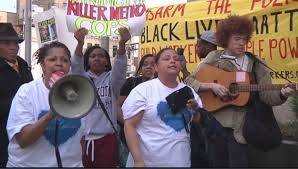 Dozens of family and community members marched in downtown Rockford on May 3 chanting “Justice for Jovan!” to protest the murder of Valentia Fresco, who went by the name Jovan Blake. The father of five children, Blake had a girlfriend with whom he had planned on building his life. Blake was gunned down by two Metro Enforcement officers on April 16 across from Auburn Manor while he was celebrating his 34th birthday.

According to witnesses, Jovan was tased, handcuffed and shot seven times. His last heard words were, “But I didn’t even do nothing.”

Metro Enforcement is an armed private security agency that patrols local housing projects and has earned the disdain of many Rockford residents throughout its history. Metro Enforcement officers chased Blake off the property that they are hired to patrol, making the legality of their pursuit extremely questionable.

While speaking outside the Rockford police station and county courthouse, Ellen M., a family friend who saw the scene after Blake was killed, said about the Metro Enforcement officers: “You tased him, handcuffed him and shot him seven times. You need to be locked up!” After the protest she said to WW reporters: “It was cold-blooded murder. … If they go free, that sends the message that they can shoot and kill and nothing will be done.”

Police officials and news reports have claimed Blake was armed with a gun, some even claiming he was armed with multiple guns. Yet no guns have been produced by the police nor any evidence shown to support claims that he was a threat. The coroner’s office has confirmed that the cause of Blake’s death was gunshot wounds, but has not said how many times he was shot or where on his body.

The names of the Metro officers have not been released, and they have not been charged in the killing. Family members are demanding charges be brought against them and plan to continue to hold demonstrations until justice has been delivered. Another protest has been called for 4 p.m. on May 13 at 618 E. State St.

Jovan Blake was another person of color whose life has been tragically cut short by racist police and vigilante terrorism that is characteristic of this rotten system of U.S. imperialism. Workers World Party expressed its condolences to Blake’s family and stands in solidarity with their fight against this criminal system.