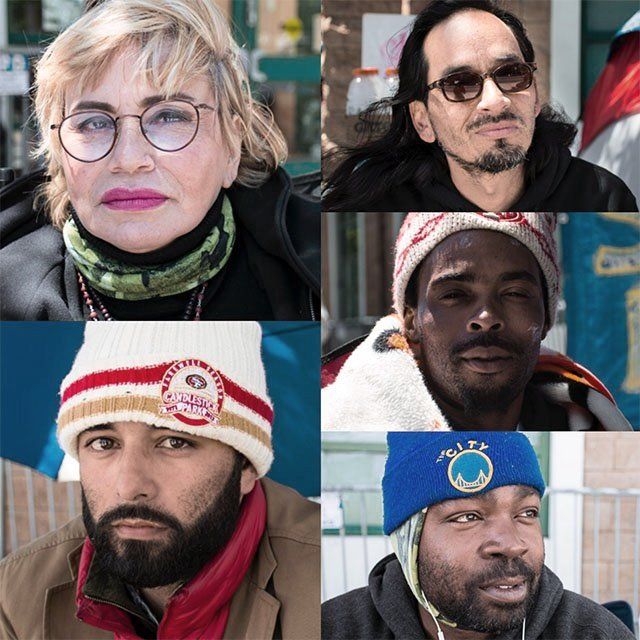 San Francisco, May 1 — Five hunger strikers, angered by ongoing police murders of Black and Brown people, have been occupying half the sidewalk in front of Mission Police Station since April 21. It’s Day 11 of their liquid-only fast, and they pledge to keep it up until San Francisco Police Chief Greg Suhr resigns or is fired.

“We see so many execution-style police murders of young Black and Latino men. It just doesn’t stop,” said Cristina Gutierrez, 66, a teacher and hunger striker. “Since the killings of Alex Nieto [in 2014], then Amilcar Perez-Lopez, then Mario Woods, the community has been on the move, with weekly meetings, town halls, marches and protests at City Hall. But it hasn’t moved the chief or the mayor one bit. Now the police gunned down Luis Gongora only a few blocks from where we’re sitting. For us, that was the last straw.”

Witnesses say Gongora, 45, a Yucatecan Mayan man from Mexico, was the target of 11 shots from police weapons on April 6 while he was sitting on the ground near his blue tent in a small homeless encampment in the Mission District. Apparently he did not understand the “orders” barked by the officers.

The “Frisco Five” hunger strikers include Gutierrez’s son Ilyich (Equipto) Sato and Ike Pinkston, both 42, who work with Gutierrez at the Companeros del Barrio preschool in the Mission. The others are Selassie Blackwell, 39, and Edwin Lindo, 29. Sato and Blackwell are hip-hop artists. Pinkston, a father of two, is a soon-to-be-published poet. Lindo is running for a seat on the San Francisco Board of Supervisors. They say their hunger strike “is organized with the guidance of the Black and Brown Social Club, which works to unite and empower the Black and Brown communities.”

Hundreds of people come by every day to offer support and encouragement to the fasters. They help prepare their drinks (a secret recipe rumored to include coconut water, broth and miso) or join them in an hour-long, raucous occupation of the nearby intersection of 17th and Valencia streets or drumming and dancing outside the police station on a Saturday afternoon.

“High school students come by,” said Gutierrez. “So many who say there’s no time to wait any more, to stop these police killings. People come by who were active in the movements of the 60s and 70s. It’s an outpouring of love from the community.”

One supporter, Ruthie Sakheim, who runs a weekly discussion series called Occupy Forum, tied the police killings to the rent-gouging, gentrification and displacement that is plaguing Black and Brown neighborhoods.

“This is not normal,” said Sakheim. “Nowadays when the police come in, they shoot people in the heart or in the head. Why is this? We know some of the officers are Army veterans who’ve been trained to shoot to kill. It’s happened so many times. This cannot be just an accident. I think they are intending to kill people in these neighborhoods. The big developers, do they have a hand in this? Are police getting orders from somewhere to terrorize these targeted areas? For sure there is more to this than meets the eye.”