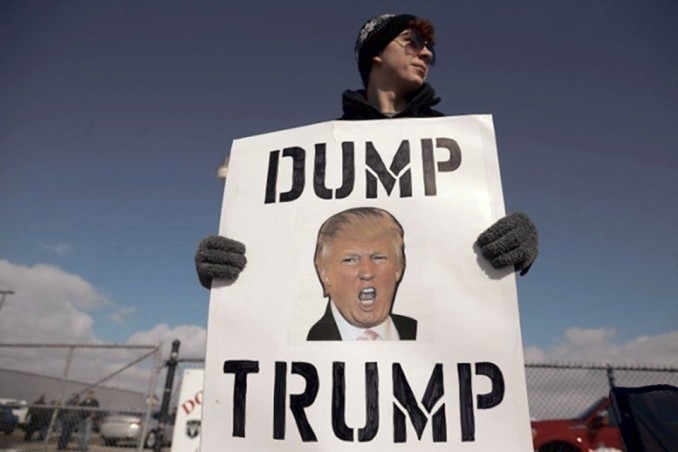 Hagerstown, Md. — Chanting “Dump Trump!” and “Racist! Sexist! Anti-gay! Donald Trump, go away!” the second of two Maryland protests confronted the Republican candidate here on April 24. The racist billionaire held his hyped up spectacle at Hagerstown Regional Airport in the mountains of western Maryland. The multinational crowd of protesters came from Baltimore, Frostburg, and the Hagerstown and Frederick areas.

State and local police stopped demonstrators from entering the rally site. Those others who were allowed in and walked the mile to see Trump had to walk past the militant protesters.

The assembled activists were able to drown out a self-declared Nazi provocateur by chanting, “Two, four, six, eight! We don’t want your racist hate!” which further added to his impotent rage.

The protesters held signs that read “No Hate in Our State,” “15 Dollars an Hour,” “Jobs Not Anti-Immigrant Hate” and a photo of Trump on which was written “No to Fascism.” The Peoples Power Assembly made full use of its sound system to chant similar slogans.

The police formed a dividing wall between the protest and Trump’s rally when more Mexican and Black youth joined the demonstration and added their voices to the anti-Trump chants. In between the chants, protesters were able to give a political rap on the group’s sound system, explaining how the economic disruption caused by the North American Free Trade Agreement (NAFTA) was responsible for an influx of desperate, impoverished immigrants. Many of the assembled held Peoples Power Assembly placards denouncing Trump’s racist and sexist campaign against Muslims, immigrants and women.

A week earlier, a protest in Berlin, Md., on the state’s Eastern Shore, defied the region’s history of racism. In the late 1960s, Civil Rights leader H. Rap Brown (now known as Jamil Abdullah Al-Amin and a political prisoner since 2002) was arrested for “inciting a riot” when he encouraged Black residents to unite and resist racism.

Demonstrators arriving from Baltimore, including members of Workers World Party, were encouraged to see that a crowd of at least 800 people, consisting of Black, Mexican-American and white youth, including LGBQT groups, were also protesting Trump. Most were from the Eastern Shore, including students from the high school where Trump would be speaking.

A group of Mexican-American students were kicked out of that school the day before Trump arrived for wearing the Mexican colors of red, white and green. They displayed heroic militancy and enthusiasm at the rally and borrowed the organizers’ megaphone to chant their slogans in both Spanish and English. The spirited rally lasted from 2 p.m. to 8:30 p.m.

Heavily armed police with a SWAT team kept the anti-racist groups on the grass when there was a confrontation with a bellicose crowd of Trump supporters.

Andre Powell, candidate for mayor of Baltimore for WWP, contributed to this article.