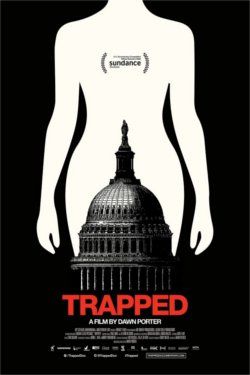 Right-wing, racist, sexist, Republican Party presidential contender Donald Trump stated March 30 that women would need “some form of punishment” if abortion were banned in this country.

What the bigoted, blowhard bully doesn’t realize — like the majority of people in the U.S. — is that women who need abortion care are already being punished.

Nearly 300 laws regulating abortion services — mostly far-reaching, medically unnecessary laws under the guise of “protecting women” — have been passed by 44 state legislatures and the District of Columbia since 2010. Written by anti-abortion “Americans United for Life,” the measures subject clinic providers to legal restrictions not required for other medical procedures or professionals, and they impose economic, social, and emotional hardships on women.

Two new documentaries reveal the deeply personal effects the new laws have on the one-in-three women who need such health care in their lifetime and on the clinic staffs who provide them.

“Trapped” by award-winning director Dawn Porter explores the ramifications of so-called TRAP laws. According to the Center for Reproductive Rights, “Targeted Regulation of Abortion Providers laws single out the medical practices of doctors who provide abortions and impose on them requirements that are different and more burdensome than those imposed on other medical practices.”

Porter goes behind clinic doors to give voice to providers and clients in Alabama and Texas. The film is timely since the Texas-based Whole Woman’s Health v. Hellerstedt case was heard by the Supreme Court on March 2, and will be decided in late June. The legal suit challenges two provisions in the 2013 Texas law HB2: abortion clinics must be ambulatory surgical centers, and doctors performing abortions must have admitting privileges at hospitals 30 miles from where they work.

Interviews with Amy Hagstrom Miller, founder and CEO of WWH, who brought the case against Texas, and Marva Sadler, director of WWH clinical services, are particularly telling. Miller describes how clinics have been forced to close, forcing poor women, especially in the southeastern region along the Rio Grande, to travel hundreds of miles at great expense to get an abortion.

Because clinic closings have put huge pressures on still-open clinics, Sadler, an African-American mother of six, describes with tears in her eyes not being able to accommodate a 13-year-old incest victim. She had to be turned away because she needed an immediate procedure, but the doctor, who is only scheduled on certain days, was not available.

Gloria Gray, owner of the West Alabama Women’s Center in Tuscaloosa, fought the admitting privileges’ law in Alabama. She discussed the issue with her provider, Dr. Willie Parker, an experienced, faith-based African-American ob-gyn, who was not approved by local hospitals. Parker is straightforward about state laws. When counseling a patient, he recites the state script that “abortions will give you breast cancer,” but adds, “Now I’ll tell you the truth — there is no scientific evidence supporting that.” Ultimately, Gray’s challenge to the law succeeded in overturning it.

“Trapped” premiered at the 2016 Sundance Film Festival, where it won the Special Jury Award for Social Impact Filmmaking.

In “Abortion: Stories Women Tell,” award-winning documentary director and producer Tracy Droz Tragos chose to focus on conditions in her home state of Missouri, where only one clinic remains open, in St. Louis. She started the movie after passage of a law requiring a 72-hour waiting period.  After a counseling session, there’s a three-day wait (regardless of rape or incest) before a woman can have an abortion. Utah, South Dakota, Oklahoma and North Carolina have similar regulations.

Droz Tragos deliberately chose to focus on women instead of politicians or current events. “Women have so many different feelings,” she told Elle magazine. “It’s very, very complicated. I knew from the onset that … my interest [was] elevating the voices of women on both sides of the issue.” (April 7)

Thirty-two of the 81 women Droz Tragos interviewed discuss their views. Those who elect abortion have a variety of reasons, mostly economic, bad timing or rape. Many are mothers, including Amie, a single-mother of two who works 70- to 90-hours a week and drives three hours to a clinic near the Illinois border for a medical abortion. Sarah, whose wanted pregnancy had a terminal birth defect, has the support of her husband and pastor. Female security guard Chi Chi verbally protects women entering her clinic from threatening male antagonists.

Of those who oppose abortion or work to ban it, there’s Reagan, a Midwest regional coordinator for Students for Life. Te’Aundra was persuaded by her boyfriend to give birth after she was barred from a basketball scholarship due to her pregnancy.

While showing both sides is startling at first — it’s the only movie I’ve seen which does that — the contrast between the two groups of women is clear. Those supporting reproductive freedom are motivated by the need for a woman to take control of her life; those who oppose abortion base their beliefs on religious dogma, shame, guilt or family pressure. The film, produced by HBO, had its world premiere at the Tribeca Film Festival, April 18-23.

Both films should have a wide showing to educate the public about the harsh, reactionary legislative climate aimed at ending women’s legal right to control their own bodies, their lives and their families. Having access to abortion is a fundamental human right. As Juan Mendez, the U.N. Special Rapporteur on Torture noted in his April 7 report to the Human Rights Council, restricting protective abortion laws is a form of torture.