Stone Mountain, Ga., April 23 — Today, hundreds of anti-racist youth and others met the challenge of a “white power” rally called by the Ku Klux Klan. It was on top of Georgia’s Stone Mountain, a massive granite outcropping, where the KKK was revived in 1915 with a cross-burning ritual.

The white supremacists predicted as many as 2,000 of their fellow bigots would attend, coming from across the country. Instead, it was the opponents of racism and fascism that far outnumbered the proponents of hate by as much as 20 to 1. 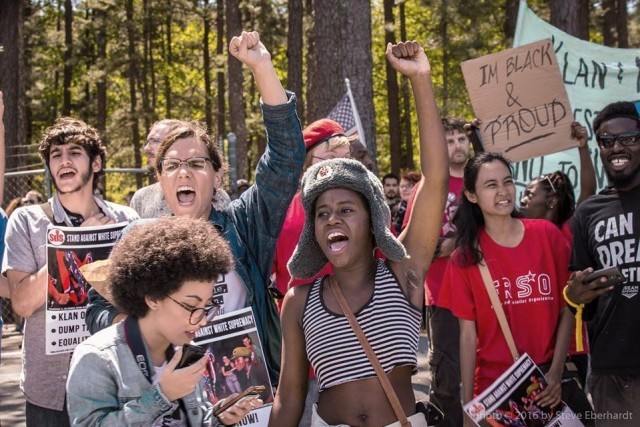 The call for action came mainly from two Atlanta-based groups, “All Out Atlanta,” a coalition formed in January of 2016 to organize for April 23, and “Rise Up,” a grassroots formation led by Black, queer and women activists who have been instrumental in empowering low-wage workers and bringing justice for Anthony Hill, murdered by police.

Individuals and organizations responded to the call from far and wide, with “Students for a Democratic Society” coming from Florida, “Huey P. Newton Gun Club” members from Alabama, multiple chapters of anti-fascist and anti-authoritarian groups from across the southeast, “Fight for $15” and immigrant rights activists, clergy and faith leaders, political organizations such as Workers World Party, and scores of people of all ages, races and backgrounds who were determined to stand against racist terrorism.

On Saturday morning, April 23, two separate actions took place almost simultaneously: a march from Stone Mountain Village to the west entrance to the park, organized by All Out Atlanta, and a blockade at the main gates, shutting down traffic for about 25 minutes, initiated by Rise Up.

The march was stopped inside the park by dozens of police in riot gear, who arrested several youth for wearing bandanas over their faces. There is an anti-Klan law against wearing masks that seems to only be used against progressive protesters.

This attack on the people’s right to oppose racism prompted additional skirmishes with the police, including some rock throwing by the angry, multinational crowd.

With all the paved roads to the site of the Klan rally blocked by police vehicles, baton-wielding cops and others with military-grade guns, the anti-racist forces from both actions dispersed into the surrounding woods, trekking through underbrush and jumping creeks until finally emerging at the edge of the parking lot where the two dozen or so Confederate-flag-waving racists were congregated inside a fenced area.

A police helicopter circled overhead. A line of perhaps 75 to 100 black-uniformed riot police ringed the fence to protect the racists. At the curb of the parking lot where eventually hundreds of militant, chanting demonstrators amassed was a similar line of SWAT cops wearing gas masks with their finger on their gun triggers, as well as many members of the six police agencies on hand.

The grassy slope and the sidewalk filled with the youthful, diverse crowd inching ever so determinedly onto the parking lot pavement, forcing the police line back. With chants of “The cops and the Klan work hand in hand!” dozens were literally inches from the faces of the repressive police.

The white supremacists ended their rally early. The anti-racists celebrated their departure.

The land that makes up Stone Mountain Park has been owned by the state of Georgia since 1958, during the height of the “Massive Resistance” period of Southern refusal to abide by the 1954 Supreme Court decision and other civil rights rulings.

It continues to be operated as a Confederate memorial and is a major tourist attraction. Confederate flags representing the secessionist, slave-holding states ring a plaza at the base of the mountain.

Park officials closed all the attractions and amusement rides for the day and canceled the laser light show for that evening. This multimedia event promotes the “heroism” of the Confederate leaders Robert E. Lee, Jefferson Davis and Stonewall Jackson, whose images astride their horses are carved into the mountain side.

This was a project supported by the KKK and initiated by the Daughters of the Confederacy in 1916, although it wasn’t completed until the park came under state control in 1972. State law prevents any alteration to the bas-relief images without legislative approval.

Some visitors who had been unaware of the racist rally taking place and were shocked at the overwhelming presence of heavily armed police and blocked roads demanded their entrance fee back.

While the corporate media focused on the arrests of anti-racist demonstrators, describing them as “violent,” there was no reporting of the hate-filled, violent rhetoric and actions of the white supremacists while inside their secured pen or as they roamed the park, yelling their vile threats.

April 23 falls between German Nazi leader Adolf Hitler’s birthday and Confederate Memorial Day at Stone Mountain Park. The same day, in Rome, Ga., some 80 or so black-uniformed Nazis and their supporters, including several in Klan robes, marched in what was billed as a “national” rally marking Hitler’s birthday.

Hundreds of residents of the city turned out to oppose their fascist and racist platform and demanded they leave and never come back.