Family, friends and supporters of political prisoner Mumia Abu-Jamal took to the streets of Philadelphia in actions on April 22 and April 23 to raise awareness of the dangerous impact of untreated hepatitis C on Abu-Jamal and thousands of others across Pennsylvania. The weekend wrapped up with a celebration of Abu-Jamal’s 62nd birthday on April 24. 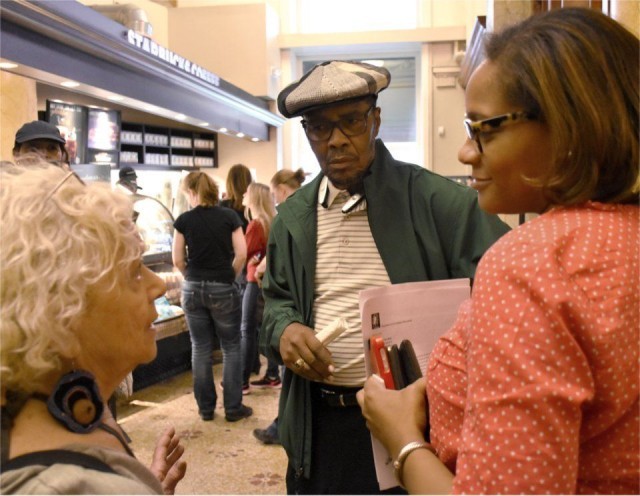 On April 22, protesters rallied outside Philadelphia City Hall and marched to the local office of Pennsylvania Governor Tom Wolf. The event was originally planned to deliver thousands of petitions calling on Wolf to make the hep C cure available to Abu-Jamal, 10,000 thousand others imprisoned by the state and 50,000 mainly Black Philadelphia residents suffering from this deadly but curable disease.

Earlier in the week organizers learned that despite repeated requests, Wolf’s office refused to assign a representative to meet with Abu-Jamal supporters, under a phony pretext that sufficient time wasn’t given for the request. They were told they could deliver the petitions to “an office manager,” but no official meeting would take place.

Considering that Wolf’s office has been inundated with calls and emails voicing concern over Abu-Jamal’s condition for over a year and that registered letters about the meeting were sent twice to Wolf, yet received no response, organizers sent Wolf a letter challenging his excuse for delaying his response on this life-and-death matter and made it public through a press release.

The letter placed Abu-Jamal’s dire circumstances in the context of former President Bill Clinton’s passage of the 1994 crime bill and his signing of the ­Anti-Terrorism and Effective Death Penalty Act in 1996, which dramatically eroded the right of prisoners to file writs of habeas corpus. The latter bill, signed 20 years ago on April 24, Abu-Jamal’s birthday, eliminated the possibility that evidence of his innocence would be reviewed by higher courts.

Shortly after taking office in January 2015, Wolf signed a moratorium against the death penalty in Pennsylvania. The letter pointed out that his refusal to provide an available cure for prisoners with hep C contradicts his public position on the death penalty and amounts to “execution through medical neglect.”

The letter also put Wolf on notice that the bold protests that have challenged Hillary Clinton’s primary campaign would continue in July at the Democratic National Convention in Philadelphia. Wolf is the top ranking Democratic politician in the state.

When the delegation reached Wolf’s office, people outside read the letter to Wolf for all to hear. Wolf’s staff was assured that demonstrators would be back next time in Harrisburg to deliver the petitions in person to the governor.

From Wolf’s office the demonstration marched to FOX News to deliver a press release, which included the letter, to the station.

March through the ‘hood’

The next day rainy weather forced a rally originally planned for Malcolm X Park to gather indoors at a youth activity center in West Philadelphia. When the rain finally cleared, a spirited march and car caravan took to the streets to bring the message that “everyone deserves the hep C cure” to residents in this predominantly African-American community.

The action received broad support from people on the streets who pumped fists in the air as they received informational fliers and took the opportunity to sign the petition for Abu-Jamal. The march, led by a contingent of youth, ended with an outdoor rally at Clark Park.

The final event of the weekend was a fundraising concert at the historic Church of the Advocate on April 24 featuring Taina Asili, along with Xilomen, Shyster aka Mrs. Betty’s Son, Sa-Roc, Dominique London and Reyes. MOVE youth groups L.I.F.E. (Life is for Everyone) and R.A.W. (Revolt Against Wrong) also performed. Participants shared a birthday cake for Mumia after everyone gathered on stage to sing him “Happy Birthday” with Stevie Wonder lyrics.