On April 24, Workers World newspaper spoke with John Parker, the Workers World Party candidate for the U.S. Senate from the state of California, who is on the ballot in that state on the Peace and Freedom Party line.

Workers World: What do you expect to accomplish with your campaign for the U.S. Senate? 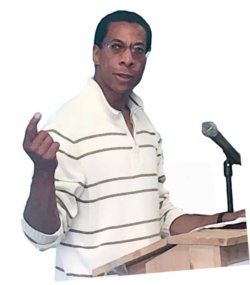 John Parker: I’m not expecting to win. Since the hundreds of millions of dollars that monopoly industries donate is only earmarked for the Democratic and Republican Party campaigns, our votes are “trumped” — pun intended — by the dollars of the ruling class. And, that’s one of the reasons for this Senate campaign: to expose how undemocratic the capitalist system is. Whatever democracy exists is reserved for the ruling class, who decide the priorities of society, the distribution of wealth in society and the level of repression necessary to maintain an unjust society.

I live in working-class South Central Los Angeles, a community mainly consisting of Black and Brown people. On my block there was a Ralph’s supermarket, which is a large grocery chain. A corporate decision replaced large grocery chains with smaller stores. CVS Pharmacy replaced Ralphs and now I’m paying almost twice what I used to pay and have an inferior selection of groceries. Our community had no say in that decision, just like the people of Flint had no say in whether GM would be allowed to contaminate the water children would be drinking with lead.

WW: What are the issues you are raising regarding police killings?

JP: Our campaign has joined nationally and will continue to join all protests of police killings and all failures to prosecute killer cops. We will also build solidarity between all sectors of the working class with the movements like Black Lives Matter.

The Los Angeles Times reported in February that in six southern California counties there has been a police shooting every other day since 2004. The primary targets of this police terror are Black and Brown people. Plus many Mexicans and Central Americans have been hunted down and killed by racist vigilantes or the Border Patrol.

The criminal justice system in fact encourages murder by law enforcement by refusing to prosecute, especially in the six southern counties of California. Even former Los Angeles District Attorney Gil Garcetti said the near certainty that local prosecutors won’t file charges against cops means it is time to take the decision out of their hands and give it to the state  attorney general.

By the way, my main opponent in this Senate race is Attorney General Kamala Harris, in the Democratic Party, who opposed a bill like the one Garcetti proposed. Harris has done absolutely nothing to combat this genocide in California. Politicians like Harris want to maintain their career path in politics, so they had better not start challenging the tools of oppression — like the cops, ICE [U.S. Immigration and Customs Enforcement] and the private, for-profit prisons that warehouse especially Black and Brown youth.

I’m neither Democrat or Republican. I’m a communist, so I don’t have to worry about losing the funding of the ruling class — and my career path is towards revolution, not the White House.

WW: How will your campaign relate to the large immigrant communities in California?

JP: Like Workers World Party’s national campaign, my efforts here in California will be to end all deportations and roundups nationwide and to support full rights for all immigrants, including Muslim immigrants.

People should first understand that it is the imperialist economic wars — especially by the U.S. — creating unfair trade policies that destroy the livelihoods of peasants and workers in other countries, that drive people to emigrate from their countries. For example, the NAFTA agreement drove millions of poor peasants and working-class people out of Mexico and Central America.

A recent study found that the Border Patrol is allowed to get away with murder and an alarming number are engaged in criminal collusion with drug cartels. Their killings are even less monitored than those committed by police terror. The Mexican and Central American immigrants face murder when attempting to cross the border and here they face the daily fear of deportation.

Then there are the imperialist wars and proxy wars like the 2009 coup in Honduras that the Obama administration orchestrated, replacing an elected government with a pro-U.S. military regime and making Honduras one of the most dangerous places in the world. Parents there send their children alone to this country in order to save their lives.

In California, Filipinos are the second largest immigrant community, and, likewise, they are forced to work here and endure the racism, discrimination and police terror.

This repression is a reflection of the world capitalist crisis of overproduction that makes for even more severe imperialist trade policies, like the “Trans-Pacific Partnership,” along with austerity and the squeezing out of workers’ social services. Austerity is a common demand from the imperialist governments that represent the same multinational monopolies that have destroyed predominantly Black cities like Detroit and Flint, Michigan.

The immigrant workers’ struggle, therefore, is a reflection of the economic and military violence by U.S. imperialism around the world that makes the building of working-class unity and solidarity essential.

WW: How do you stand on U.S. foreign policy?

JP: All imperialist wars are for the purpose of enriching the ruling class. They are never in the interests of working people. The trillions of dollars that go towards enriching the military-industrial complex players like Raytheon, Lockheed, Boeing, etc., are directly taken from the monies that would go towards health and human services.