After 10 months of trying to negotiate a contract with their anti-union bosses, 40,000 Verizon landline and FIOS workers in nine states and Washington, D.C., struck the company April 13. The two striking unions, the Communication Workers and the International Brotherhood of Electrical Workers, are up against an antagonistic, intransigent company demanding outrageous concessions.

As CWA District 1, which includes New York, reports, “The company has not moved off of any of their retrogressive proposals.” However, the 30,000 CWA members and 10,000 IBEW members are showing no signs of backing down either.

New York striker “Fitz,” a CWA Local 1101 shop steward, explained to WW, “We’re currently on strike because Verizon is trying to institute a system of breaking our union through different techniques. They want to be able to move us up to 200 miles away for a period of time. As a father and a husband, [that would mean] I can’t be there for my family, and it’s just wrong. Here in New York less than 40 percent of the city is wired up for FiOS [fiber optic system for high-speed internet]. There is enough work for us to do here in New York so that we can stay and do the job that Verizon promised to its customers.

“Also they want to freeze our pensions at 30 years,” Fitz continued. This means that when workers who start working at age 21 reach 51, they won’t see any more pension increases no matter how many years they continue working.

Fitz added, “The company has pretty much waived its responsibilities for us. They’re also talking about moving our call centers from the United States to the Philippines. All of these things are detrimental to us. Last,  we’re trying to unionize Verizon wireless because their technicians make about half of what we make and they have no benefits. They have no job security, and we’re trying to help them bring their standard of living up as well.” 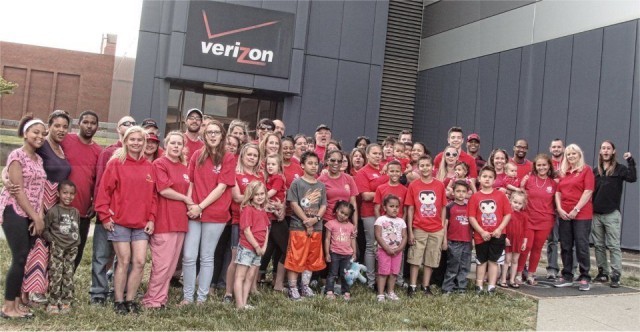 Another issue is cuts to health insurance for both active workers and retirees.

On top of all the givebacks Verizon is demanding, strikers were further incensed when they learned about the new high-tech spying phone app the company created. It allows the company immediate access to photos and videos of strikers “engaged in misconduct” taken by strikebreaking managers and line-crossers.

This is 21st century strikebreaking, serving the same capitalist agenda as the notorious Pinkerton goons of the last two centuries who were hired by bosses to break up work stoppages and other labor protests.

Unions say: ‘We have their attention now!’

New York strikers had a huge rally of 8,000 on April 18. Aerial photos show a unified sea of red, the color of CWA and IBEW strike T-shirts. Their picket lines are strong.

The strikers won a huge victory when three major Manhattan hotels cancelled Verizon’s room rentals and threw out the strikebreakers who were staying in them — and agreed not to rent rooms to them again. This was due to quick action and picketing outside the hotels by CWA strikers and solidarity from the hotel workers’ union and Teamsters Local 814.

In all nine struck states — Massachusetts, Connecticut, Rhode Island, New York, New Jersey, Pennsylvania, Delaware, Maryland and Virginia, — and Washington, D.C., there were rallies during the week beginning with April 18. There was a big rally in Wise, Va., where the population is 3,300.  Picket lines throughout Virginia remain solid. The “sea of red” is flowing up and down the East Coast.. 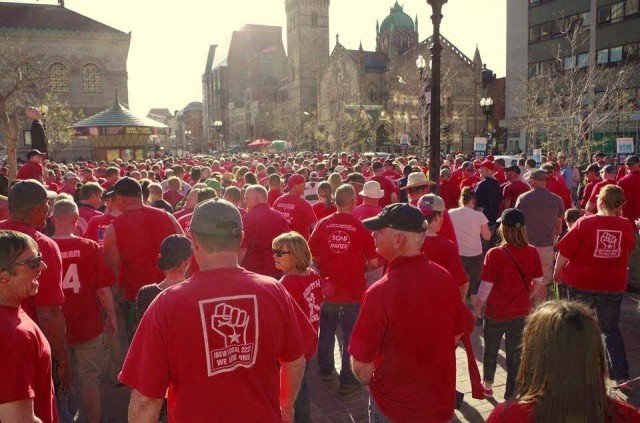 Steve Kirschbaum, vice president of the Boston School Bus Drivers Union, Steelworkers Local 8751, said the strikers’ “fightback spirit sets the gold standard for standing up to corporate greed as exemplified by Verizon, the worst of capitalist parasites.” He pointed out, “No union in 2016 can go it alone without the solidarity of the communities we serve as well as the entire working class.”

Following the Boston rally, thousands of strikers and supporters marched to a nearby Verizon Wireless store on Boylston Street. Union members  occupied the street and tied up traffic in downtown Boston’s busiest shopping street for over an hour. IBEW’s successful show of strength of its troops was covered by all major Boston media.

In its post-rally electronic newsletter, Local 2222 stated, “They did not think we had the courage to strike, but make no mistake, we have their attention now. We will not stop until we have the contract we deserve!”

Johnnie Stevens and WW staff in Virginia and Boston contributed to this article.