In the former Soviet Union, Cosmonautics Day on April 12 celebrates the anniversary of the first space flight by a human, Cosmonaut Yuri Gagarin, on April 12, 1961, and the great advances in space exploration opened up by socialist construction in the USSR.

Communists in the city of Donetsk, capital of the Donetsk People’s Republic, held a festival for children in honor of Cosmonautics Day, with chalk drawing, music and renovation of the playground at the local planetarium. 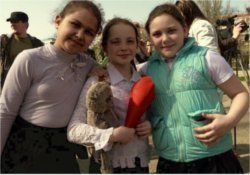 The centerpiece was the refurbishing and stenciling of rocket-themed playground equipment with images of Gagarin and other symbols of the Soviet space program.

This year, the Communist Union of Donbass and the Workers’ Party of Donbass put out a call to “celebrate Cosmonautics Day under the red flag!” These recently founded, activism-oriented groups unite veteran organizers with youth, and local communists with political exiles from Ukraine, where the far-right government backed by Washington has banned communist organizations and unleashed neo-Nazi groups against opponents.

Svetlana Licht told Workers World: “We gave the kids crayons and paper for airplanes. They all scrambled immediately to draw rockets, Gagarin and, more often than not, our planet. They told us all they knew about the Soviet space program, Gagarin, and Belka and Strelka [the first dogs in space].

“I told the children that Gagarin and [spacecraft designer Sergei] Korolev dreamed of arranging a flight to the moon. The kids apparently decided that the moon was not enough for the Soviet space program, so they drew Gagarin on Pluto.”

Residents are working hard to rebuild from two years of war unleashed by the Ukrainian regime against Donetsk and its sister independent republic, Lugansk. And they are persevering, despite continued Ukrainian shelling of the capital and other towns and villages.

Members of the Communist Union and the Workers’ Party have been active in the reconstruction efforts, including spring subbotniks (days of volunteer labor) on weekends. They promised to return to the planetarium later in April to make further renovations and improvements to the playground.