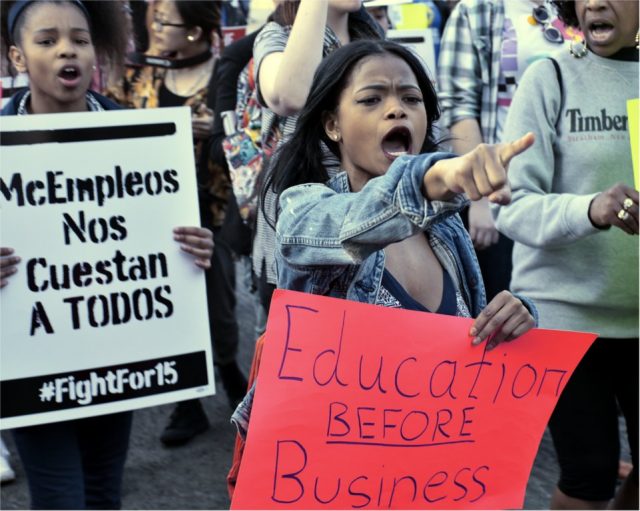 Despite heavy-handed police repression against three leading organizers, members of the Philadelphia Coalition for R.E.A.L. (Racial, Economic And Legal) Justice and several hundred supporters marched through the city’s central business district on April 14, locking down traffic at rush hour.

Dubbed the “Day of Rage,” the protest demanded Black community control of police, reparations, an end to the racist police practice of “stop and frisk,” and the removal of Philadelphia Mayor Jim Kenney from office after he reneged on his campaign promise to end stop and frisk.

The marchers were joined en route by contingents from “Stadium Stompers,” who demanded an end to Temple University’s gentrification of North Philadelphia, and “Fight for $15” organizers, who tied the issues of gentrification and poverty wages to racist police violence.

In a blatant attempt to suppress the protest, Philly cops arrested three prominent REAL Justice organizers several hours before it began. In an early morning action, protesters had been demonstrating outside the FOX TV news studio to call attention to the network’s racist bias when one activist was struck by a moving car. The driver of the car, who appeared to be white, was allowed by police to leave the scene almost immediately without being charged, while three Black protesters, including the one who had just been hit, were promptly arrested. No serious injuries were reported. Police held the protesters in custody for approximately 28 hours despite only minor charges being filed against just one of the three.

News of the politically motivated arrests spread quickly among members of the REAL Justice Coalition, who released a statement promising that there would be “no peace in Philadelphia until these comrades are released.”

The coalition also announced that, rather than cancelling the Day of Rage march, it would instead bring the march directly to the police station where the three were being held. At 6 p.m., marchers from the participating organizations descended on the Ninth Police District headquarters, occupying the street outside. Police formed a wall in front of the station, outnumbering the protesters as many as three-to-one at times.

Despite near-freezing temperatures, the protesters continued to hold the street for the rest of the night, dividing into rotating five-hour shifts until the political prisoners were finally released the next day.

The Philly Police Department’s shameless attempt to break the movement by arresting three leaders failed, as the coalition’s militant response shows that power is in the people, and not in individual leaders.