Los Angeles — Transgender and queer students at a high school here scored a victory for the entire lesbian, gay, bisexual, trans*, queer community on April 21 when they won the right to have the first gender-neutral bathroom in the Los Angeles Unified School District.

For several months, the Gay-Straight Alliance (GSA) at the Santee Education Complex in historic South Central LA has been organizing for a gender-neutral bathroom after trans* student Alonzo Hernandez, 16, faced problems when trying to go into the girls’ bathroom. 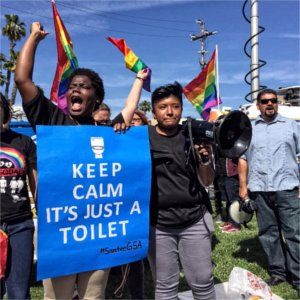 Alonzo transitioned from female to male and said they* were uncomfortable going to the boys’ room since students and staff mainly recognized them as female. (*The pronoun that some transgender people choose to be identified by is they/them.) Alonzo said they often waited all day to use the bathroom because of the difficulties.

Santee Education Complex has a history of activism. Many of its teachers and staff are political and even revolutionaries. So it was a no-brainer for many of the staff to support trans* and queer students for the right to “pee in peace.”

When news came out that this LA high school would be the first school in history to let students of different genders use the same bathroom and that a sign would be hung saying “All-Gender Restroom,” right-wing homophobes mobilized. On April 19, these bigots and reactionaries protested outside the school and even attacked some of the students.

However, the students, teachers and community were quick to respond and called a counterdemonstration in support of the GSA for the following day. One of the key organizations they called for support was Union del Barrio, a community-based, revolutionary, grass-roots organization that takes up many working-class issues. Spokespeople Ron Gochez and Benjamin Prado applauded the students’ militant work and expressed their firm alliance with the LGBTQ students.

A Union del Barrio member told WW, “I have three children, and one of them may be gay, so I have to come out for non-straight people now to send a message to my family where I stand.”

Hundreds of students, teachers, community groups and even elected officials came out to support the queer students. It was a wonderful show of progress on this issue. The victory in South Central LA demonstrates that despite reactionary attempts to push queer people back into the closet, like efforts in North Carolina, the LGBTQ community and its straight supporters are more advanced than ever; revolutionary and forward-thinking ideas on gender will prevail. 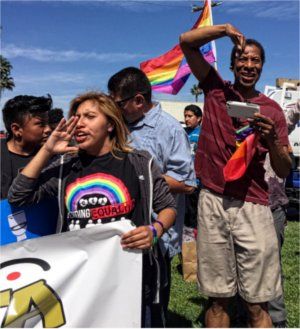 John Parker, Workers World Party candidate for U.S. Senate on the Peace and Freedom ballot in California, attended the event and was asked to open the rally. Parker said, “Whether it’s police terror or anti-gay attacks, we have to take the example of these courageous students who, like the Black Lives Matter movement, are fighting back against the attacks that aim to divide and weaken our movement.”

The Gay-Straight Alliance at Santee is urging the movement to use the hashtag #itsjustatoilet.

Trans* is used with an asterisk to indicate the spectrum of all the different genders of people who do not conform to the either/or of male/female or masculine/feminine.