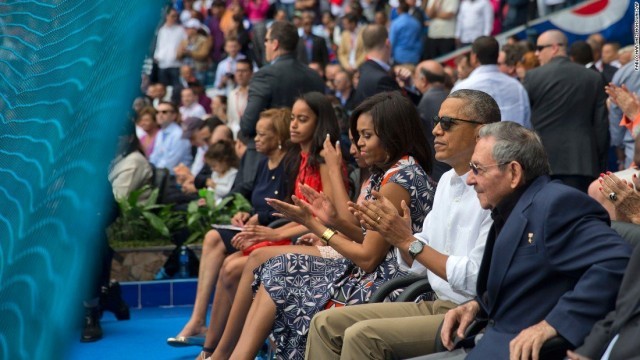 The following is the first part of an article published in CubaDebate on April 7 by Agustín Lage Dávila, who has been director of the Center of Molecular Immunology in Cuba since 1991 and a member of the Cuban National Assembly of the Popular Power (Parliament) since 1993. It is available in full at tinyurl.com/hxcvjb3.

I had the chance to participate in various meetings with the delegation that accompanied President Barack Obama [to Cuba] and to hear him speak three times; and now I feel a need to share my interpretation of what he said, and also what he didn’t say — since in politics what is left out is often as important as what is said.

There are two complementary angles from which to interpret both this visit and the entire process of attempting to normalize relations: what they mean for assessing the past, and what they mean as we move towards the future.

Looking to the past, it is clear that the recently initiated process of normalizing relations between Cuba and the United States must be interpreted as a victory, writ large, of the revolutionary and socialist people of Cuba, of their convictions, their capacity for resistance and sacrifice, their culture, their ethical commitment to social justice; and as a victory for Latin American solidarity with Cuba.

There are some things so obvious to us Cubans that sometimes we forget to underscore them.

‘A victory for Cuba’

I don’t believe that any reasonable, informed person in today’s world could interpret this normalization process as anything but a victory for Cuba in its historic differendum with the U.S.

Looking to the past, this is the only possible interpretation.

Now then, looking to the future, things are more complicated, and there are at least two possible and extreme interpretations, as well as their intermediate variations:

Both are being debated on Cuban street corners. Readers should be aware at this point that I don’t plan to argue for one or the other of these two hypotheses, or for any combination of the two. Future developments will put them to the test, and everyone will be able to draw their own conclusions from this “passage into the unknown.”

Those who defend the hypothesis of perverse conspiracy see President Obama’s words as false promises or subtle deception, at the service of a plan conceived for us to open our doors to U.S. capital and the influence of its mass media; allow a privileged economic sector to expand in Cuba, one that with time would be transformed into the social base for the restoration of capitalism and renunciation of national sovereignty. That would be the first step towards returning Cuba to a country of rich and poor, dictators and gangsters — such as we had in the 1950s.

Cubans who think this way have the right to do so: many past deeds in our common history justify such enormous mistrust. These are well known and I don’t need to list them here.

Many people remember the famous phrase attributed to [U.S.] President Franklin D. Roosevelt, referring to Nicaraguan dictator Anastasio Somoza: “Somoza may be a son of a bitch, but he’s our son of a bitch.”

Of course, neither President Obama, nor today’s generations of North Americans of good will (and there are many) are to blame, as individuals, for the first stages of this historical journey. But also, undeniably, the history is there, and it conditions what they can do and the way we interpret what they do. History’s processes are much longer than a single human lifetime, and events occurring many decades ago influence our options now, because they influence collective attitudes that exist objectively and relatively independent of leaders’ ideas and intentions.

Even distancing President Obama from the aggressive and immoral policies of previous administrations — those that organized invasions, protected terrorists, fomented assassinations of Cuban leaders and implemented intentions to starve the Cuban people into submission — even establishing this distinction, it can’t be forgotten that Obama alone is not the policy making class in the U.S.

In all honesty, I should recognize that the impression given by President Obama here wasn’t as conveyor of a perverse conspiracy, but rather as an intelligent, educated man, who believes in what he says. What happens then is that the things he believes in (with every right) are different from those we believe in (also with every right).

This is the second hypothesis then, the one concerning different conceptions of human society, differences that were quite evident in all that was said and also what was left unsaid, throughout the visit by President Obama and his delegation.

They made it very clear that the main direction U.S. relations with Cuba will take will be economic, and within the economic arena, the main strategy will be to engage with and support the nonstate sector.

That was very clear, in the speeches and symbolic messages, taking distance from the socialist state-sector economy, as if “state” property were the property of some strange entity, not ownership by the whole people, as it is in reality.

We agree that a nonstate sector should exist in the Cuban economy. In fact, expanded space for self-employment and cooperatives is part and parcel of implementing the guidelines that emerged from the 6th [Communist] Party Congress. But we disagree on the role that this nonstate sector should have in our economy.

Part 2 will discuss the disagreements regarding the nonstate sector.