Anger at this outrageous price gouging prompted loud global demonstrations on April 1. At Gilead’s headquarters in California’s Silicon Valley, hep C patients and caregivers from Oakland’s Oasis Clinic, their faces painted yellow to symbolize the effects of this debilitating disease, staged a “die-in,” while a crowd chanted: “Gilead’s profits are rising! Hep C patients are dying!”

Speakers, who included Dr. Diana Sylvestre and Orlando Chavez from the Oasis Clinic, pointed out that over 5 million people in the U.S. are infected with the virus, including some 200,000 military veterans and 700,000 people in U.S. prisons — including political prisoner Mumia Abu-Jamal.

Mumia was infected with hep C virus in 1981 from a tainted prison blood transfusion after he was shot by police, according to a statement by the Labor Action Committee to Free Mumia Abu-Jamal that was read at the rally. “Mumia’s infection began to show symptoms in 2015, which is typical for this slow-incubating but usually fatal (if untreated) disease. Mass mobilization is the only reason Mumia got any medical attention at all, and he is still denied the curative Harvoni treatment. … The Pennsylvania prison system is now trying to kill Mumia by medical neglect.”

Abu-Jamal’s lawyers recently unearthed a Pennsylvania Department of Corrections secret protocol explicitly calling for “observation, but no treatment for HCV infected prisoners, until they are at death’s door (if then),” the committee said.  Mumia has filed suit against the DOC. He is asking that all 10,000 prisoners in Pennsylvania who suffer from HCV be given the curative pills. 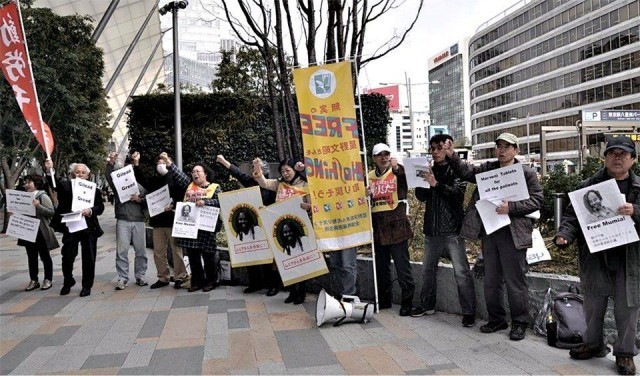 Demonstrations, initially called by ACT-UP (the AIDS Coalition to Unleash Power), also took place the same day in London, Paris, New York and Johannesburg, demanding that the pills be made available free to prisoners and affordably to all HCV sufferers.

Their cause is supported by South Africa’s largest union. The NUMSA metalworkers union wrote to Pennsylvania Gov. Tom Wolf earlier this year demanding that Harvoni pills be given free to Mumia and other HCV-infected prisoners. “The refusal of health care,” said the NUMSA letter, “reminds us of the conditions we were put in under apartheid prisons [in South Africa], where sick detainees were allowed to die in very deplorable lonely conditions in solitary as part of the punishment for their role in the struggle.”

Gilead Sciences, which turned a net profit of $18 billion in 2015 from revenues of $32 billion, has been well connected with movers and shakers in Washington, D.C. Donald Rumsfeld joined its board of directors in 1988, the year the company was founded, and served as chair of Gilead from 1997 to 2001, when George W. Bush appointed him secretary of defense. George P. Schultz, secretary of state under Ronald Reagan, also served on the Gilead board.