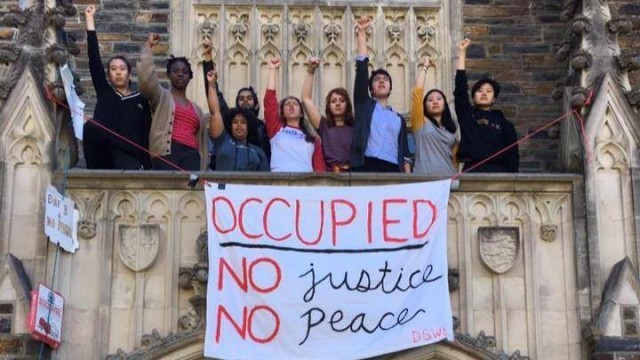 April 6 –The Workers World Party 2016 Moorehead-Lilly presidential campaign sends our solidarity to the occupation of the administration building  currently underway at Duke University in Durham, N.C. At the time of this writing, the occupation by nine students to protest racist attacks on Black and Brown university workers and to support workers’ organizing on campus for justice — including higher wages of at least $15/hour — is entering its sixth day, with no signs of backing down.

On April 1, several hundred workers and students held a demonstration on campus that began the occupation. Since then, hundreds have rallied around the clock outside the administration building. An encampment of dozens of tents has been set up on the lawn to hold rallies, teach-ins, meetings and other activities to build and deepen the base of support for the occupation and to safeguard from any attempts by university administrators and police to break it up.

The protest stemmed from recent revelations that Tallman Trask – a white Duke University Executive Vice President – hit Shelvia Underwood, an African-American who works as a university parking attendant, with his car. Before fleeing the scene, Trask hurled a racial epithet at Underwood, who suffered physical injuries requiring medical attention. Trask and other university administrators conspired to cover this incident up, along with numerous other reports by Black and Brown parking attendants and other campus workers of rampant racism. Two of the demands of the occupation are reparations for Underwood and a full and transparent investigation into the racism in campus departments.

Already, the occupation has scored two major victories based on the demands put forward: a public apology by Trask and unconditional amnesty for the nine occupiers.

The occupation at Duke University comes amidst a wave of militant protests against racism on campuses sweeping the U.S., which is part of the broader Black Lives Matter movement. From massive walkouts in response to racist police murders; to the strikes and protests against racism on campus at the University of Missouri that led to the resignation of the chancellor there; and much more, protests at universities against racism, white supremacy and bigotry have been spreading from coast to coast. This must continue, along with showing our solidarity with the struggle against the campus-wide epidemic of sexual violence against women and anti-lesbian-gay- bisexual-transgender-queer bigotry.

These demonstrations and building occupations happening today carry on the long legacy of the Black freedom struggle on campuses. During the height of the Black Liberation movement, many universities were rocked by protests and occupations led by Black students to win a number of important anti-racist victories — including an occupation in 1969 of the very building that Duke students have taken over now.

Racism and national oppression are essential for the capitalist system in order to amass vast wealth for the small class of rulers by exploiting the labor of the masses of society, the workers.  We fight for revolutionary socialism — a system where the workers and the oppressed run society and put the resources we create to meet our own needs.

To the occupiers and the many hundreds engaged in this struggle: Your courage, militancy and steadfast commitment to carry the struggle through to victory — and the principled unity and solidarity that has been built between workers and students — is setting an example for the broader movement. We salute you!

We salute the courageous workers who spoke out against racism in defiance of those who want to silence them. Some of the blue-collar workers at Duke are unionized, and the non-tenure-track faculty recently won a union. We stand with the workers until they are all unionized across campus and until justice is won by those fired under racist conditions.

The many peoples’ struggles for justice around the U.S. are with you and are watching closely how these events unfold. We are ready to mobilize in your support and defense, as needed. Carry the struggle forward to victory!