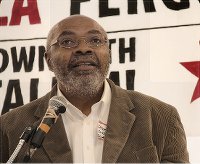 The role of African Americans is pivotal during the last two months of primaries and caucuses in approximately 20 states.

Both candidates for the Democratic nomination, former Secretary of State Hillary Clinton and Sen. Bernie Sanders, have made special appeals to win over the African-American electorate.

This process goes back at least to 1960, when a re-emergent Black electorate swung its support to Democratic candidate Sen. John F. Kennedy in a significant move that landed him in the White House. Nonetheless, numerous militants from the period, such as Malcolm X and Stokely Carmichael, criticized the Kennedy administration for its failure to protect Civil Rights workers as well as its failure to navigate legislation through Congress to protect the social and political rights of nationally oppressed African Americans.

On Aug. 6, 1965, the Voting Rights Act was signed into law by President Lyndon B. Johnson. The bill was the product of the escalating struggle of the African-American people during the mid-1960s to demand full equality and the right to self-determination.

Nearly five decades later, on June 25, 2013, the U.S. Supreme Court struck down the enforcement provisions of the Voting Rights Act by a 5-4 ruling in the case of Shelby County [Ala.] v. Holder. This decision eviscerated the authority of the Justice Department to monitor and intervene when issues related to ballot access and legislative representation are involved. Recently deceased Supreme Court Justice Antonin Scalia remarked at the time that such a bill in the modern period represented some form of “racial privilege” for African Americans. This statement was made at a time when the Great Recession had devastated African Americans in the areas of home foreclosures, job losses, declining income and household wealth.

A New York Times article said the ruling “effectively struck down the heart of the Voting Rights Act of 1965 by a 5-to-4 vote, freeing nine states, mostly in the South, to change their election laws without advance federal approval. … At the core of the disagreement was whether racial minorities continued to face barriers to voting in states with a history of discrimination.” (June 25, 2013)

Representing the majority in the decision, conservative Justice John G. Roberts wrote, “Our country has changed. While any racial discrimination in voting is too much, Congress must ensure that the legislation it passes to remedy that problem speaks to current conditions.”

Laws instituted by various states to enhance barriers to ballot access were vindicated by the ruling. In the same New York Times article, authorities in Texas “announced shortly after the decision that a voter identification law that had been blocked would go into effect immediately, and that redistricting maps there would no longer need federal approval.”

These and other measures, such as the denial of ballot access for those having criminal records, disqualifies approximately 25 percent of African-American voters in Florida. Overall, some 1.3 million people in this Southern state were missing on voter rolls at the time of the primary elections on March 15.

No concrete measures were ever initiated to address these concerns under the administration of President Barack Obama. The elections in 2010, 2012 and 2014 witnessed the transformation of the Democrats from a majority to a minority in Congress.

The absence of an effective political alternative both within and outside of Congress resulted in the deepening of a right-wing political agenda that has enhanced the capacity of the capitalist class to dominate the workers and oppressed generally. State repression by the police and intelligence agencies reinforces the system of exploitation with impunity.

Nearly all the mass demonstrations and rebellions since 2012 have been in response to the cop and vigilante killings of African Americans and Latinos/as. These protests and acts of property destruction have prompted the stark display of militarization at all levels of law enforcement, which have been supplied by the federal government with automatic weapons, armored vehicles, tanks, chemicals, batons and sound devices designed to repress and disperse crowds.

New polls indicate that the Sanders campaign has gained significant support in the African-American community in the Midwest and West Coast. One recent poll indicated that within a period of two months, Sanders now leads Clinton among African-American voters in Wisconsin prior to the April 5 primary.

The poll suggests that “in short, the Clinton campaign is in the midst of an historic collapse — much of it due to the unraveling of support for Clinton among nonwhite voters — and the national media has yet to take any notice.” Primary elections in the next few weeks will prove or disprove these assertions.

This trend was illustrated in Michigan during early March and was reflected in the questionably close margins of victory by Clinton in Illinois and Missouri, along with the overall lack of enthusiasm for the former secretary of state’s second presidential campaign.

At any rate there is a degree of desperation in the Clinton campaign particularly in reference to the outcome of the Wisconsin primary. Clinton held campaign rallies in African-American neighborhoods in Milwaukee during the last week of March.

In two major events, U.S. Rep. Gwen Moore, Wisconsin’s sole African-American member of the House, stood next to Clinton on stage. Moore welcomed Clinton at a Boys and Girls Club by claiming that the former New York senator and first lady had helped African-American youth in South Carolina while working for the Children’s Defense Fund. (WPR.org, March 31)

What do African Americans have to gain from their continued support for centrist Democratic candidates, in light of the history of the 1990s under Clinton and the last eight years of the Obama administration? Joblessness, poverty, mass incarceration, police terrorism and entrenched institutional racism remain structural barriers to socio-economic advancement and political empowerment.

The apparent shift in outlook toward the Sanders campaign illustrates the discontent among numerous Democratic Party constituencies, of which African Americans are an indispensable grouping. Clinton’s reliance on elected officials and party organizational structures has not been nearly enough to sustain a series of victories in the South and other areas during the early phase of the campaign.

Questions are being raised in the electorate over the role of the “superdelegate” process, in which committed forces, most representing party bosses, maintain the capacity to override electoral losses suffered by Clinton in several key states, including Michigan, Alaska, Hawaii and New Hampshire. This will become a critical debate in light of several polls that show Sanders running a much stronger campaign against Republican frontrunner Donald Trump in the general elections in November.

These shifts in political views must lead toward greater political independence during the primary process, the national elections and beyond. Ultimately, African Americans, the nationally oppressed from other communities and the working class in general must break with the Democratic Party to establish their own organization that will speak in their name and fight for a program of total liberation and genuine socialist construction.