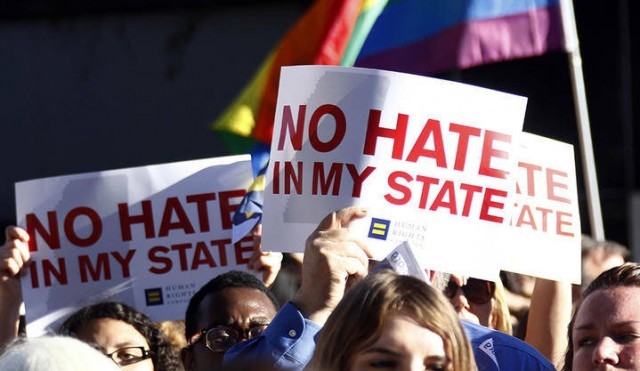 April 4 — On the evening of Wednesday, March 30, the Mississippi Senate voted to pass the so-called “Protecting Freedom of Conscience From Government Discrimination Act” or “the Religious Liberty Bill.” The state House on Friday, April 1, followed suit and passed HB 1523. However, the bill was delayed by Mississippi Democrats and will face another vote today. The bill is expected to pass, before being sent to Gov. Phil Bryant for his signature. Bryant has said he will sign it.

This fast track to bigotry against the LGBTQ community is being cloaked under the lofty pretense of “freedom of religion.” The heinous law would allow businesses, public employees, organizations and individuals to legally deny LGBTQ people in Mississippi the right to marry, adopt children and have access to housing, jobs and services. Blatant discrimination would be legal if the existence of lesbian, gay, bisexual, trans* and queer people was perceived to violate religious beliefs that marriage is only between a man and a woman and that gender is determined at birth.

The Clarion Ledger in Jackson, Miss., further laid out the provisions of the sweeping law on April 1, saying it would:

“Prohibit the government from taking any action against religious organizations that decline to provide adoption or foster care services to married same-sex couples.

“Allow physicians and other medical professionals to deny services related to sex reassignment or ‘psychological, counseling or fertility services’ based upon their religious beliefs.

“Prohibit government from taking action against employers or school officials who establish sex-specific rules and policies concerning who may use restrooms, lockers or dressing rooms.

“Protect individuals whose sincerely held beliefs include that ‘sexual relations are properly reserved’ to a marriage between a man and a woman, raising questions about whether single mothers could be targeted.”

Bigotry laws can be fought, defeated

A fierce backlash in Georgia caused Gov. Nathan Deal, a Republican, to veto a similar law on March 28. LGBTQ and civil rights activists joined large employers and the entertainment industry to condemn HB 757. Deal was forced by this pressure to veto the anti-LGBTQ law and conceded, “I do not think we have to discriminate against anyone to protect the faith-based community in Georgia, which I and my family have been a part of for generations.” (gov.georgia.gov, March 28)

Both the Georgia and Mississippi bills came on the heels of North Carolina’s notoriously bigoted edict passed and signed into law by Gov. Pat McCrory on March 23. HB 2, which requires trans* people to use a restroom in line with their “biological sex” instead of their own gender, also lets trans* people be legally denied public accommodations based on their actual or perceived gender. (See “Protests erupt over bigoted law: Black and trans* people lead way in N. Carolina” in Workers World issue dated April 7 or at workers.org.)

The legalization of LGBTQ marriage on June 26 of last year, the Black Lives Matter movement and other struggles for justice have galvanized this bigoted backlash in the South. It’s up to the people’s struggle to defeat racist and bigoted laws and all reactionary moves. Solidarity and unity, under the leadership of the most oppressed, will be key in these struggles.

Trans* with an asterisk is currently used to indicate the wide spectrum of varying genders of people who do not conform to the either/or of feminine/masculine, female/male.